After enjoying Diwali with his family, actor Aadar Jain has flown to The Maldives with his ‘special one’. The actor shared some pics on his Insta Stories after reaching the exotic spot. He also shared a sneak peek of probably his villa where he will be stationed. They are there to celebrate Tara’s 25th birthday.

Aadar Jain posted the pic of his supposed ladylove Tara Sutaria chilling by the beach side, but did not disclose her face. He wrote in caption, “#VIEWTOAKILL.” The image boasts of Tara in a printed swimsuit, with her locks tied in a bun, whilst one can only see Aadar’s legs. There were also 2 pairs of sunglasses placed beside it and a glass of drink. 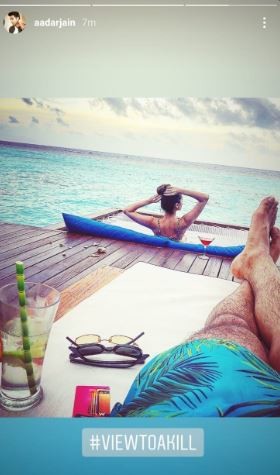 The two can be witnessed making the most of their time in the cool breeze of Maldivian sea and clear blue waters. The pics are extremely eye-pleasing. Today morning the actress also shared an aerial view of the Maldives.

The hums about Tara in a love relationship with Aadar reached the web at his brother Armaan Jain’s marriage when the two were witnessed together all the time. They also performed together on the sangeet. They also made an appearance at Malaika Arora’s party in 2019, and then at Amitabh Bachchan’s Diwali party. They celebrated New Year in London together. The actress was also seen with Kapoor and Jain family at their special days and gatherings. She also became part of Kapoor family’s Raksha Bandhan celebration.

On the professional front, the actress’s last project was Marjaavaan. Now, she will be witnessed in Tadap.