Akanksha Puri On Wedding Rumors With Mika: We’re Not Engaged Nor We Have Any Such Plan

Ace Bollywood singer Mika Singh recently seeks the blessings of baba ji as he hosted an ‘Akhand Paath’ at his place in Mumbai. During the Akanth Paath Sahib, Mika was seen along with popular TV and film actress Akanksha Puri. While the singer posted a few video recordings from the pure and pious ‘Paath’ session, Akanksha also posted a small clip featuring the singer and her seeking blessings during the ‘Akhand Paath’. 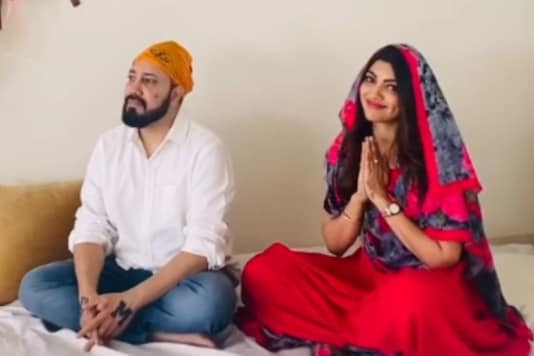 Akanksha also tagged the Punjabi hunk in her post and followed it up with a red heart emoticon.

Recent images and video recordings of Akanksha Puri and Mika Singh ignited marriage rumors. The pics led fans to think that the pair is making plans to get married. Turns out it was close knit prayer meet at Mika’s home.

While talking to media people, Akanksha elucidated that the reports are wrong and the images and videos are from a paath (pooja) that she attended at the singer’s residence. “So this was a paath (pooja) that he (Mika Singh) kept at his residence, it’s done for positivity and good luck for future,” she told the portal adding, “I just went there to seek blessings but looks like people are assuming something else! And coincidentally this was on April fool’s day so people thought it’s some prank but these are genuine pictures and videos from his house!! Mika and I know each other for more than 12 years now, he is more like a family, he has always been there for me and we share a very strong bond!! But definitely, we are not engaged nor we have any such plans!!”

“I know, our fans love to see us together but sorry it’s not happening,” the Vighnaharta Ganesha actress said.