Alaya F, who made an entry in the Hindi film industry with Saif Ali Khan and Tabu-starrer Jawaani Jaaneman, is relishing each and every moment of attention that’s coming her way after her debut film. She has frequently been mesmerizing her fans and admirers with pics and videos on her personal Insta handle. Now, once again, the Budding Bollywood starlet has come up with a photo-op in the bathtub. Not only this, but the cute actress has also shared a funny reason for getting snapped in that manner. Alaya shared a string of images on Instagram, where she can be witnessed sitting on a bathtub putting on a black vest and boy shorts.

“I saw golden hour light near the bathtub and I ran to it,” she wrote as the caption.

Alaya F made her Bollywood debut in 2020. The newbie bagged a positive response from all sides. But, the pandemic lockdown played spoilsport in her journey. She also bagged her first Filmfare award for her debut film. 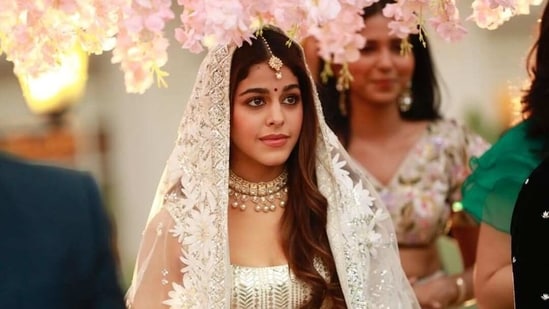 On celebrating her first Filmfare award with her parents, she stated, “Both my parents were so proud and overwhelmed that they were crying. I didn’t even tell them that the awards were happening as it meant so much to me and I was scared of not winning. Although, I was confident that I did the best I could in my first film.”

“The moment I sat in my car after winning the award, I recorded a video to send both my parents. My father saw it immediately and called all excited and overwhelmed, but my mother was already asleep, so she only saw it the next day. She called me the next day and started by scolding me saying this is the kind of stuff I need to wake her up in the middle of the night for, even if it means calling hundreds of times. The next day, she flew in to surprise me while I was celebrating at my dad’s. As for wishes from other people, I haven’t got these number of messages for all my birthdays combined as I have got for this win.

She is currently seen in the music video Aaj Sajeya.