On her birth anniversary, Alia Bhatt chose a put on a black-colored sequined outfit. Alia’s mentor and most favorite person Karan Johar made all the arrangements of a birthday party at his residence for the actress. 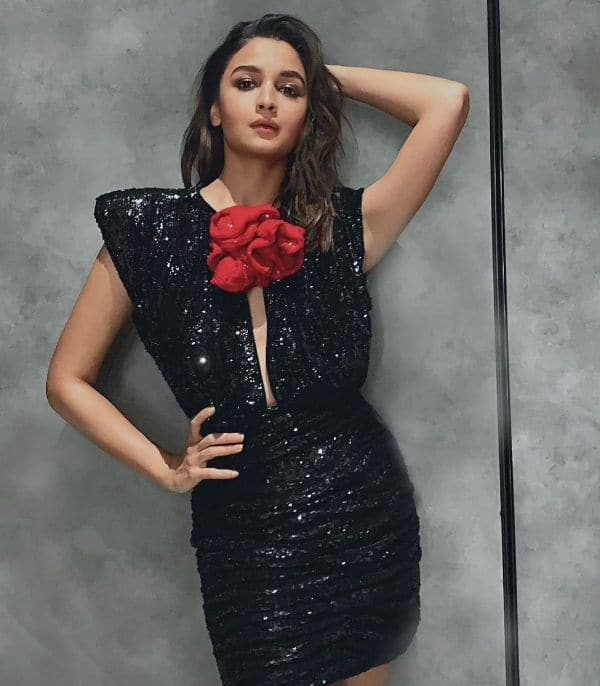 The bash was graced by biggies like Aditya Roy Kapur, Aryan Khan, and Shashank Khaitan. The birthday girl looked glamorous in a black outfit that she matched with heels from Christian Louboutin. Alia Bhatt kept her makeup minimal with mild smokey eyes. She preferred the messy hair look for the night. Overall, Alia Bhatt looked wonderful.

Miss Bhatt got styled by ace stylist Lakshmi Lehr. The popular stylist Lakshmi Lehr has decked up actresses such as Sara Ali Khan, Janhvi Kapoor, and Ananya Panday for the magazine covers. Alia’s hair stylist for the night was Mike Desir and her makeup was done by Puneet Saini.

The outfit worn by the Raazi actress was from the international label, Magda Butrym. The label came into existence during the year 2014. The sleeveless sequin mini outfit also boasts of a red rose at the collar.

When we talk about the price of the outfit, it costs €2355 on the authorized website of the brand. If we transform the figure to Indian currency, the value is Rs 2, 02, 788. At that cost, one can buy a high-end motorcycle from brands like Royal Enfield, Honda, Jawa, Husqvarna, Suzuki and others.

On the work front, Alia Bhatt and Ranbir Kapoor will be next seen in Ayan Mukherjee’s Brahmastra which is a multi-starrer movie. First, the movie was scheduled for the December release, but now its release has also been pushed. Alia also has Gangubai Kathiawadi and many other projects in her kitty.