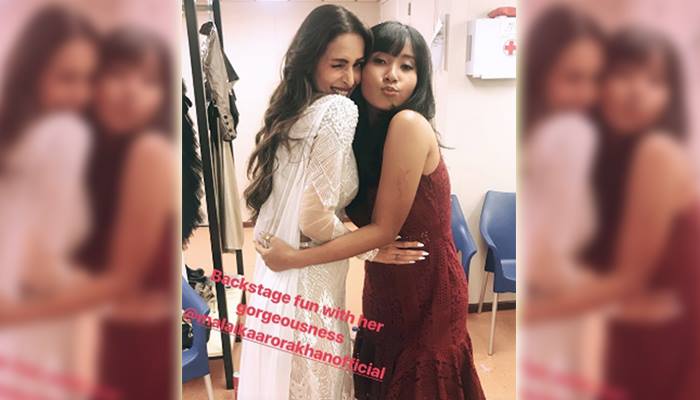 Ex-supermodel and well-known personality Milind Soman became the heartthrob ever since he hit the screens in Alisha Chinai’s most popular music video ‘Made in India’.

At this time, he is on a cruise tour with co-workers Malaika Arora, VJ Anusha Dandekar and wifey Ankita Konwar, where they appear to be filming the third part of the reality TV series named ‘India’s Next Top Model’, where the superstar dons the role of co-judges.

Soman might have been hectic with work projects but thanks to his ladylove, who has shared all the BTS action by posting images on her personal Insta handle. In recent times, Milind’s wifey Ankita Konwar showcases the unnoticed feat by posting a series of images as her Insta stories. Essaying the different sides of the cruise ship, Anikta shared images and video recordings together with Malaika Arora and Anusha Dandekar.

In the image posted by Ankita, one can witness both her and Malaika embracing one another and giving a special pose for the camera. But, the highpoint of the post is Ankita’s pretty pout and Malaika’s unmissable glitter.

She further captioned the image as ‘Backstage fun with her gorgeousness Malaika Arora.’

And last but not the least, Ankita shared an image with Anusha Dandekar and captioned it as ‘My Sweetheart’.

Ankita repeatedly follows Milind Soman on the sets of India’s Next Model. During the last month, she posted a video, in which she and Milind revivified Miley Cyrus’ hit music video Wrecking Ball. The pair could be witnessed posing with a shiny disco ball. Ankita’s video recording trended big time all over the social media.

Ankita captioned it. “Hanging out with the ultra-husband on the sets of India’s Next Top Model.”

Milind Soman tied the nuptial knot to Ankita Konwar in the month of April this year. The couple opted for a old-style Maharashtrian ceremonial in Alibaug.

Milind was previously wedded to French actress Mylene Jampanoi, whom he had met on the sets of the 2006 movie Valley Of Flowers.