Ankita Lokhande has been voicing her opinions and demanding justice for ex boyfriend Sushant Singh Rajput ever since he passed away. The actress has been trying her best to support Sushant’s family. She has been continuously using social media as a medium to voice her opinion and put forward her point.

A while back Ankita posted a statement on her Instagram handle answering the questions raised against her. And just recently, she shared a cryptic quote on her profile talking about ‘Karma’ and ‘Fate’. The post further raised a lot of speculations around it, as Ankita captioned the post as “JUSTICE”.

Looks like Ankita is finally in her happy and goofy place after all this. She recently shared a collage of four pictures on her Instagram story. These were Ankita’s morning bed selfies, where she is seen being her goofy self and glowing.

In the pictures, Ankita is tucked in her bed under the covers, wearing a blush pink t-shirt and a lipstick in the same shade looking fresh and gorgeous. The collage has pictures of Ankita with her eyes closed, followed by being a little goofy and then looking straight into the camera. These pictures of Pavitra Rishta actress are definitely unmissable. 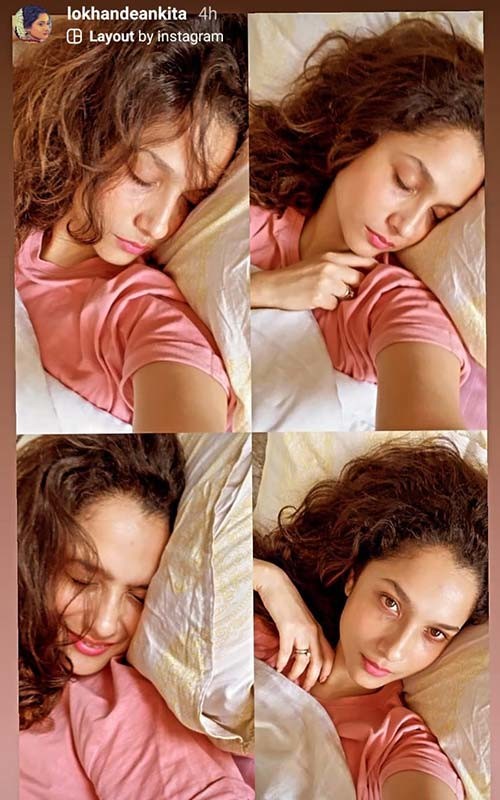 On personal front, Ankita has also been hitting headlines with her fiance Vicky Jain. Vicky has been very supportive of Ankita’s each and every move and has stood by her during these difficult times like a strong pillar. The reports say that they will soon get married, but there is no development on the dates yet.

Meanwhile on the work front, after her amazing performance in Kangana Ranaut’s Manikarnika, Ankita Lokhande was last seen in Baaghi 3 released in 2020. Though there no other announced projects of her, the fans would love to see her on screen as soon as possible.