Arjun Kapoor and his three sisters Anshula Kapoor, Janhvi and Khushi Kapoor have come really close after Sridevi left the world. The four siblings are extremely protective and caring for each other and also flaunt their love on the social media making all of us go aww. Arjun definitely won the award for the best brother in the world who loves all his sisters. They all step out together on various occasions as a happy family giving us all family goals.

Not just this, their social media camaraderie and funny banter also bring a smile to our face. From liking and commenting on each other pictures to sharing some amazing memories with each other, the four siblings have become quite popular.

And recently, during a Q and A sessions on Instagram, a fan asked who is Boney Kapoor’s favorite child out of four of them. Replying to the fan’s answer, Anshula said, it was Khushi. Oops, Anshula accidentally revealed the secret but was quick to mention that her father Boney Kapoor loves all four of them equally. Whoa, now that’s such a delight! 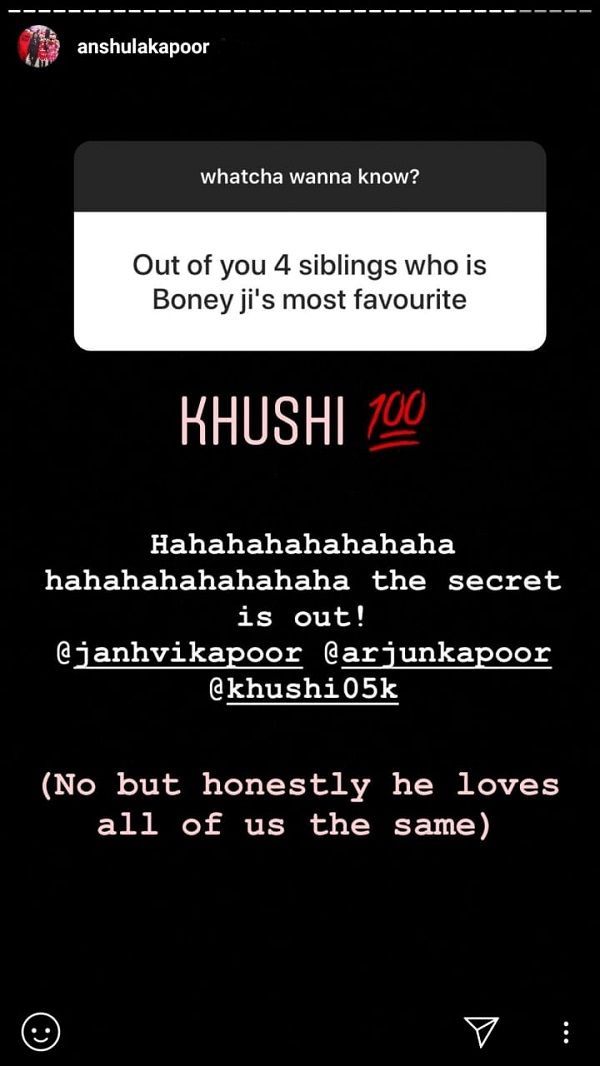 Well, it’s not just Boney Kapoor, but all the four of them equally love each other a lot and are one of the best siblings Bollywood ever witnessed.

Anshula unlike her brother and sister Janhvi is away from the glamour world and quite successful in her career. While Khushi too has followed the same path as of now. Meanwhile, Jahnvi stepped in Bollywood with Dhadak which was a huge hit at the box-office, while Arjun is already an established Bollywood star who has worked with a number of popular celebs. On the work-front, Arjun will be seen in Namaste England opposite Parineeti Chopra whose trailer recently released. He will also be seen in Sandeep Aur Pinky Faraar again with Parineeti. He has also started shooting for India’s Most Wanted, a thriller being directed by Raj Kumar Gupta.