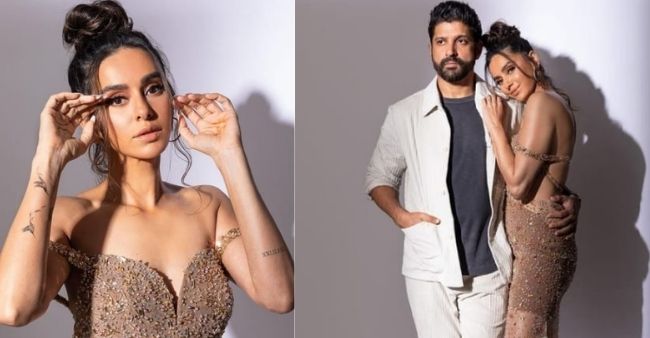 VJ and Actress Anusha Dandekar raised a toat to the newlyweds Farhan Akhtar and Shibani Dandekar, with her hysterical new post on her Instagram handle.

Anusha took to her Instagram handle on Thursday to share a lovely message that was all about sibling banter. Anusha said in the post that featured a handful of dreamy photos from the wedding ceremony, “A love like this…Congratulations Chicken and Fu-in-law.”

Anusha went on to add with heart emoticons, “I love you both so very much, and watching every day go by with so many people that love you and love to celebrate you was the most beautiful thing ever.” She added, “As a sister dealing with Bridezilla was worth it because she became Cinderella in the end…..”

The couple got hitched last weekend in an intimate ceremony surrounded by their closest family and friends. Farhan and Shibani exchanged vows at Javed Akhtar’s farmhouse on February 19. While the filmmaker rocked a tux, his ladylove was stunned in a custom red gown that she paired with a veil. Shibani announced her marriage on her Instagram handle and even changed her name on her profile to Shibani Dandekar-Akhtar. Shibani also updated her bio that now reads, Producer, Presenter, Actress, Singer and Mrs. Akhtar’ in her bio.