Recently, Bollywood beauty Aishwarya Rai Bachchan graced the wedding ceremony of her cousin. Bachchan bahu was seen in a cheery mood at the marriage that she attended along with her loving hubby Abhishek Bachchan, sweet daughter Aaradhya Bachchan and mom Vrinda Rai. 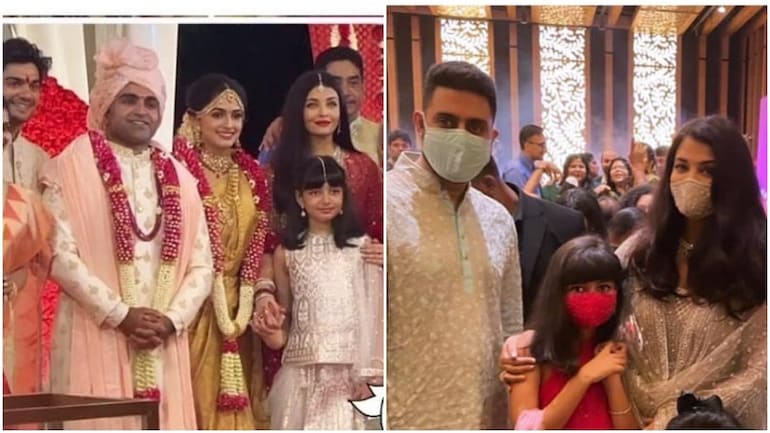 The star pair, who is busy because of their respective projects, took some time out for a special family occasion. They looked best in their glittery attires.

At her cousin Shloka Shetty’s marriage, Aishwarya Rai, Abhishek Bachchan and Aaradhya posed with the bride and groom together with a lot of other guests. The pictures of the star pair from the wedding ceremony have already reached the web. The fans are in awe of their pics in which Ash can be seen posing with some of her relatives and other guests.

In another photo, Aishwarya looks glowing in a red customary get-up. In the pic, she posed with two relatives. Abhishek, who could not attend the final wedding day, didn’t miss any entertainment as wifey Ash made a video call to him from the party. A photograph of Aishwarya smiling in the red getup while holding her handset as Junior Bachchan waved to a relative has surfaced all over the web.

Abhishek graced the pre-wedding ceremony. In the images, the actor can be witnessed posing with his family members with their masks on. 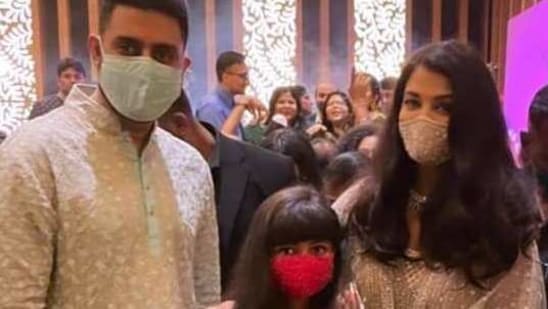 Abhishek Bachchan is currently filming for his next movie Dasvi in Agra. On February 22, the makers rolled out the first-look pictures of the actors from the movie. Abhishek, Yami Gautam and Nimrat Kaur’s posters were also revealed. Sharing the poster, Abhishek Bachchan wrote, “Meet GANGA RAM CHAUDHARY #Dasvi Shxxt Begins.”