Remember the shy, worried, and pretty little Anandi from the 2008’s most popular and loving TV show, Balika Vadhu? Now, she is a grown-up beauty, who mostly graces the Tollywood projects and Hindi television shows.

After the success of her first show Balika Vadhu, Avika Gor found a place in the hearts of her viewers again after donning the character of Roli Siddhant Bharadwaj in another popular TV show, Sasural Simar Ka.

When Avika made an entry into the television industry, she turned out to be a household name and even today, over a decade later, she is everyone’s favorite actress. She is still known as cute Anandi. But, the actress has changed from an adorable child performer to a stunning diva. It was a few days back when the actress had dumbfounded one and all with her amazing fat-to-fab journey.

She shared a series of pictures of herself, which are her first photo session after shedding the extra weight. Putting on a long white shirt, matched with a denim belt and denim knee-high boots, she kept her tresses open and can be witnessed embracing her curly locks. She looked spectacular while sitting on a brown stool and posed for the camera. Her caption read, “I was excited and nervous so I looked at myself in the mirror only after the styling & Hair-makeup was done for look 1. The first statement that came out of my mouth was, “Dude, I love what you’ve done to my hair.” and Sandy was kind enough to share that, It’s your natural hair. We didn’t need to do much. It made me realize how we all take so many of our qualities/characteristics for granted. I was so busy worrying about what I didn’t like in myself, that I didn’t really acknowledge the good things(not just physical appearance, overall). Ever since I try my best to think of the positives in me & it helps me feel confident & peaceful.” 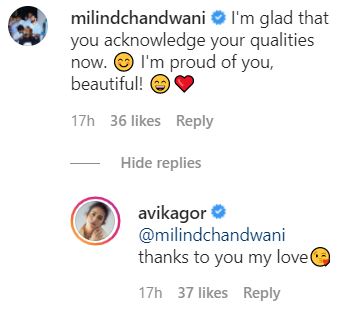 In Avika’s post, her pleased boyfriend, Milind Chandwani wrote, “I’m glad that you acknowledge your qualities now. I’m proud of you, beautiful!”

For the unknown, Avika has introduced her buffs and followers with the love of her life Milind Chandwani. She has made her love relationship official on social media a few days back by sharing an image from their Goa vacation.