Bigg Boss 14 contenders Pavitra Punia and Eijaz Khan are ruling the social media platforms for their cutesy moments. When the two were in the Bigg Boss house together, they constantly topped headlines for their special relationship but when Pavitra got eliminated, the TV actor confessed all about his special feelings for Pavitra.

Eijaz Khan also stated that he would like to be with her always.

At the moment, during a recent day trip, the cute lovers Pavitra and Eijaz were clicked together. The lovey-dovey pair couldn’t keep their hands off each other in the presence of others. They were seen full of love as cameras rolled on. 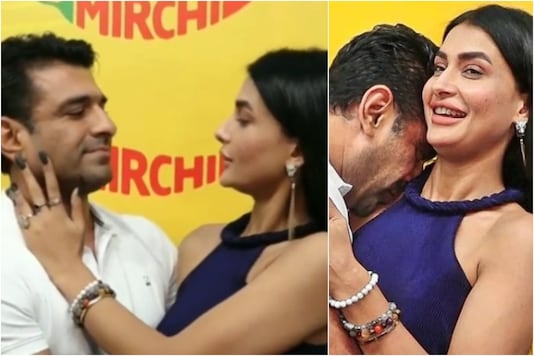 At one moment, the actor even pats a kiss on Pavitra’s cheek. Their delightful moments are winning over fans’ hearts. Eijaz and Pavitra came close when they spent time in the BB house and now they are inseparable.

Eijaz bid adieu to the Bigg Boss 14 house close to the finale and never came back on the show. Eijaz stated that his fans and followers were uninterruptedly sending messages to him on social media platforms asking him to re-enter the reality show. The actor expressed his displeasure about not being capable of reappearing to the house because of professional commitments. They got recently clicked together again at an occasion, where ex Bigg Boss 14 contender, Shardul Pandit, was also there. And when he embraced Pavitra slightly longer, Eijaz got possessive.

In the video going viral at the present, Pavitra is seen embracing Shardul Pandit while Eijaz Khan looks on. Later, Eijaz possessively stated, “Leave her alone!”