New Bride Sneha Drove Hubby To Her Sasuraal At Her Vidaai; Also Shares Her In-Laws’ Reaction

We have witnessed joyous brides making entry to their wedding venues with dhol and shaking a leg, we have also witnessed them ditching the customary laal joda and putting on whatever makes them glad and we have witnessed them gushing over their dulha in the presence of other people. Another bride, who has recently confronted the social standards, is Sneha Singhi as she drove her hubby, Saugat Upadhaya to her sasuraal at her vidaai. Sneha, who is a chef in Calcutta and owns a couple of cafes in the city, talked about her decision to drive the car on her vidaai.

She said, “So we had spoken about it weeks ago, and I told Saugat I’ll do this, he laughed and said yeah of course that sounds awesome and it really will be something! After the wedding, I genuinely forgot about it and was ready to sit in the car. But Saugat commanded me to drive. He just said sit and drive. I was stunned and excited at the same time.” Sneha’s verdict to drive at her vidaai is absolutely breaking all the stereotypes and setting novel standards for the newly wedded females out there. It was not just an empowering transformation but for Sneha, it also showcased how much her spouse loves her and permits her to be self-determining and independent.

When she was questioned about the aspect that inspired her to do all this, she stated, “I really didn’t think of any of this. I’m the one who’s always driving Saugat around. In fact, after our first date, I was the one who dropped him home, even though he had his own chauffeur-driven car. I’ve always been super independent when it comes to things like this, and he’s always let me be the person I am and encouraged me to do more.” 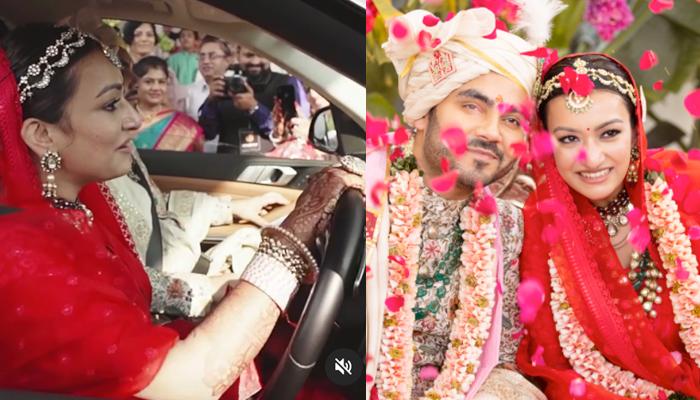 When we talk about her in-laws reaction, they are very loving and understanding. We reside in a society in which the reflection of in-laws is considered to be harsh and creating a difference between bahu and beti. The only worry of her dad-in-law was if she will be capable of seeing and driving through the beautification made over the car. They were all pleased to witness their bahu make the exciting move.

She remembered, “They were more than happy! Saugat doesn’t drive and they know I am the one who drives him around. My brother in law sat behind and my husband said to my father in law “Daddy, she’ll easily manage” only because he was worried I would be able to see what’s in front because of the humongous floral bouquet on the bonnet.”