New Daddy Gaurav Chopraa Croons A Lullaby For His Baby Boy; Video Is Too Adorable 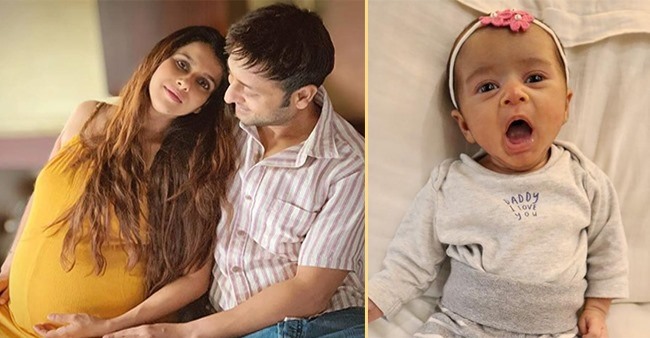 Actor Gaurav Chopraa and his wife Hitisha have been blessed with a cute little baby boy amid this pandemic. They are enjoying their first parenthood to the fullest. Gaurav, the doting father whose happiness has no boundaries now, shared the news with his fans in an adorable manner. Since then, he is sharing pictures that reveal he is living every moment with his son.

Gaurav’s latest post on Instagram will leave you in awe. The actor has shared a video where he is heard singing lullaby for his little munchkin. The video and a picture show the Bigg Boss 10’s contestant holding the newborn with utmost care and love while the little one is sleeping with a warm feeling.

He wrote that both the baby and the father turned two weeks. He addressed himself as the “infant daddy” and added that both are learning. He shares sweetly that though his song lacks tune and rhythm, his son still falls asleep as he is “kind enough.” The actor wrote, “He loves to wriggle and snuggle into my neck.”

Gaurav’s further wrote that he “had mentioned this song a previous post…had improvised this for a scene in #uttaran, its originally from #kabhikabhie.. Hope you’re kind enough to ignore the besuri singing as well”

The actor lost both his parents due to the pandemic. He shared his pain on social media but also wrote that he has started a new journey as a father and stated that his father is guiding him from within to take steps as a father to the newborn.

“Tomorrow it shall be a month to my father passing away …While I take baby steps to become a daddy, he guides and mentors me from within ..If only …,” he added further.