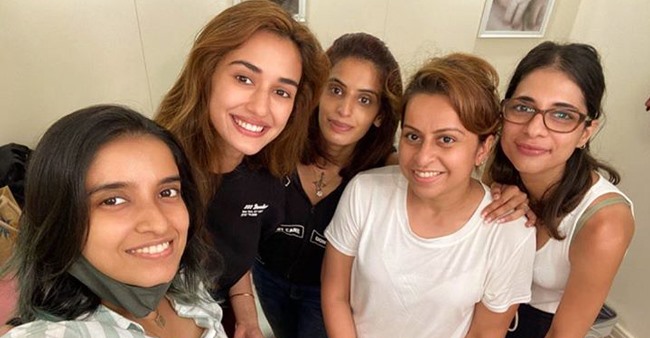 Disha Patani is very popular on social media too. She never gets tired of sharing glimpses of her lifestyle and activities. Be it a candid selfie, or a workout video, Disha’s fans are treated often with attractive posts on her social media account.

Disha recently shared videos on Instagram after she resumed the filming work of Salman Khan’s Radhe. After that, she has again posted something to overwhelm her fans. She has just gone down memory lane via the photo gallery of herself and found out a picture taken during her beach vacay. Disha has just set the internet afire with her looks. The picture shows her in a yellow monokini. Her style is as usual unique.

Earlier Disha had posted a video clip on her IG stories to appreciate Bollywood actor Tiger Shroff. Tiger has debuted in singing in the recent past. As the fans showered their love on Tiger for his soulful singing of the song ‘Unbelievable,’ the video of Disha Patani also caught their eyeballs. Disha was seen moving her body to the tunes of the song by Tiger Shroff. Fans just kept gushing over Disha’s bespectacled look.

In the professional field, it was the film Malang directed by Mohit Suri in which Disha was last seen. Anil Kapoor, Kunal Kemmu, and Aditya Roy Kapoor were also starred in the movie.

Disha’s next project is Radhe: Your Most Wanted Bhai directed by Pravu Deva and starring Salman Khan. Randeep Hooda will also be seen in the film. The filming for Radhe is going on in Lonavla. The reports said that after filming some portions in the studios, a romantic song is being filmed currently in the hills.