Gajraj Rao’s selfie with Ayushmann and Jitendra is adorably unmissable

The government of India announced a lockdown in March. It has been almost six months to that now. Though the government has now relaxed a few restrictions, a lot of us still miss spending time with our friends. This naturally makes us go down the memory lane and scrape out the best memories from the time before lockdown. Looks like actor Gajraj Rao is in the same state and is enjoying the memory town from pre lockdown period.

Recently, on September 23, 2020, the veteran actor shared a picture on his Instagram story that is absolutely adorable. The picture has Ayushmann Khurana and Jitendra Kumar with him as the trio enjoyed the selfie. As the trio smiled for the camera, it reminded us of the movie ‘Shubh Mangal Zyada Saavdhan’ that brought them together. 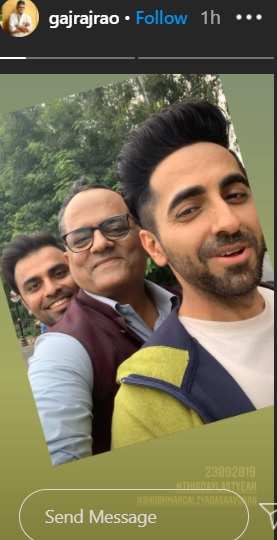 The actors worked together in the film Shubh Mangal Zyada Saavdhan. The movie was a sequel to Shubh Mangal Saavdhan. While the original movie talked about erectile dysfunction, the sequel talked about gay marriage and its treatment in the society. Neena Gupta was also starred as a key role in the movie. Though the movie received mixed reviews from the audience, it definitely made a difference and made everyone realise the importance of ‘Pride’ movement.

Ayushmann Khurana, Gajraj Rao and Neena Gupta starred together in another movie earlier, that was Badhaai Ho. The movie also starred Sanya Malhotra in a key role, the film received positive reviews from the audience and the critics alike.

Meanwhile, talking about Ayushmann Khurana’s work front, he is preparing for his next project with the director Abhishek Kapoor. In this project, he will be playing a cross-functional athlete. Ayushmann has also made his way into this year’s Times Magazine’s list of 100 Most Influential People as an artist.

Published by Vidhutma Singhania on 24 Sep 2020