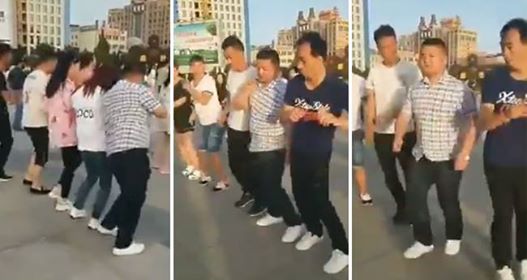 With the impending festive season, people wait for their favorite fest Navratri where they get to dance on Garba Nights and the fever has started from now onward, not only Indians but Chinese are also showing their craze for Garba.

Garba is a form of dance which originated in the state of Gujarat in India. The name is derived from the Sanskrit term Garbha and Deep. Traditionally, it is performed during the nine-day Hindu festival Navaratri. Garba is widely liked by people all around the world.

Garba mania inside the Chinese and the video is going Viral…Check out all the details.

This time there’s a video of Chinese people which are seen putting their feet together in the tune of Garba song. Garba is a traditional Gujarati folk dance performed in circular movements. And we can understand that it is not easy for the Chinese to make their feet dancing on traditional folk dance Garba.

The video is taking the internet to another level as this time even Anand Mahindra the chairman of  Mahindra company has tweeted on this dance video.

This made me smile again. The post came with the caption: “Chinese Garba.” Well the music may have been grafted on to some random Chinese dance but with Navratri around the corner, it’s nice to imagine hordes of chinese tourists dancing along with us…😊 pic.twitter.com/7878TNm5Md

Mahindra, in his tweet, shared how “the music may have been grafted on to some random Chinese dance but with Navratri around the corner, it’s nice to imagine hordes of Chinese tourists dancing along with us.”

Moreover, its said that the video is dubbed and the original song is different, but it is really sweet to see them dancing this way.

Well the Garba festive season is about to start so all us should get ready for the Dandiya Nights, the kind of environment is set during the season is unforgettable. Modern Garba is also heavily influenced by Dandiya Raas, a dance traditionally performed by men. The merger of these two dances has formed the high-energy dance that is seen today during the festive season.

Many competition and fair are held on this occasion and is hugely celebrated by everyone. We will catch you up with more funky news till then stay glued!