One of the most delightful pairs of Bollywood, Genelia D’Souza and Riteish Deshmukh are huge social media buffs and keep on posting fabulous posts from their private plus professional front. 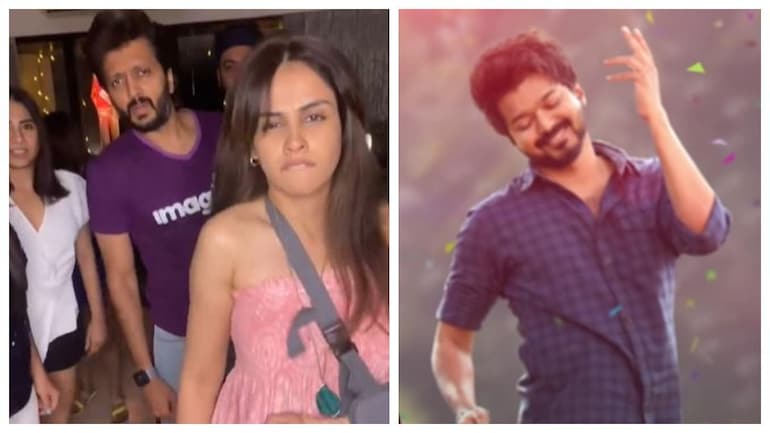 Taking to her Instagram handle, Genelia posted a fun-filled video recording. She gave a special caption to the funny video with Ram Pothineni that can be read as “N this is what the weekend looks like. Ayyo ayyo ayyo…Babu garu first time reel chestunaru kada…siggu paduthunaru @ram_pothineni you are the cutest. Thank You for the madness.” Recently, the star wife posted a fun-filled video recording from their house bash in which she could be witnessed shaking a leg with a hurt hand together with her husband and besties.

The loving pair along with some of their friends recently made the most of their house party in which everyone seemed to be shaking a leg to actor Thalapathy Vijay’s super-hit number ‘Vaathi Coming’ from the flick ‘Master’.

In the video recording, the star wife could be witnessed with a hurt arm. Recently she posted a video and while disclosing how she hurt her arm during a skating session, the actress wrote a message that reads, “My Recovery Pawri Story. A few weeks ago I decided to learn skating because I thought I could be an inspirational and great company to my kids…I envisioned putting out a really cool video on the gram once I learned it…Alas!!!! But I thought I should put this out in any way, because the gram is always about success stories but how about the times we fall?? sometimes you got to fall before you fly.”

In the meantime, on the professional front, the actress is acknowledged for her superb acting talents. She has also worked in a number of Telugu, Hindi, Tamil, Kannada and Malayalam movies. The actress started her acting profession with the movie ‘Tujhe Meri Kasam’ during the year 2003. Later, the actress worked in several Bollywood films such as ‘Jaane Tu… Ya Jaane Na’, ‘Tere Naal Love Ho Gaya’ and lots others.