Ileana D’Cruz is well known, not only for South Indian films but in the whole entertainment industry. ‘Devadasu,’ a 2006 Telugu language romantic comedy-drama film, marked her acting debut. Ileana made her Bollywood debut with Anurag Basu’s award-winning silencing film, Barfi in 2002 after appearing in a number of South Indian films and earning critical acclaim for her performances, and now has a strong fanbase.

Ileana D’Cruz has recently made big in her role in Abhishek Bachchan’s film ‘The Big Bull.’ The film was originally scheduled to be released in theatres but instead debuted on Amazon Prime Video, where it received a positive reception. Ileana D’Cruz is well-known for her outstanding on-screen roles, but she is also well-known for being a very active social media user. Scroll down to have a look at Ileana’s sun-kissed pictures!

1. The actress dressed in a black bikini top and white shorts enjoying the gorgeous sunny weather while listening to Snoop Dogg’s song ‘Sunshine.’ She captioned it, “Turned Mama’s backyard into my little sunbathing spot.” 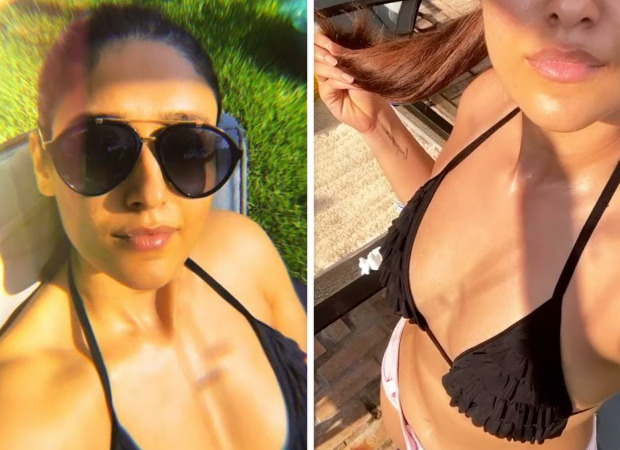 2. Ileana in a white bikini as the sun rays bounce off behind her! She posted it during the lockdown, with the caption, “I miss the beach.” 3. The actress photographed candidly on the beach while wearing blue swimwear and admiring the beautiful water! 4. Ileana sunkissed in a blue and black swimsuit and black sunglasses along with a necklace! She posted the video a few days before her birthday while she was on a vacation. She was also wearing a necklace and sunglasses that completed her look. 5. The Rustom actress in a trendy neon outfit posted this picture from London, on her Instagram story in 2019.

6. Barfi actress in a stunning pink bikini! This throwback picture is from her vacation in Fiji with her boyfriend in 2016.