After Kunal Jaisingh of Ishqbaaaz fame took everyone by surprise when he announced his engagement to longtime ladylove Bharati Kumar, it’s one more star from the show who got engaged. On the special occasion of  Janmashtami, Additi Gupta got engaged to her beau, Kabir Chopra in a hush-hush ceremony. However, nothing much was known by Aditi and Kabir but it was definitely a great surprise for us.

The popular TV actress was previously dating an investment banker Rizwan Bachav for around five years. But unfortunately, they called it quits in 2017. Aditi was also linked to her co-star Laksh Lalwani with whom she worked in the show Pardes Main Hai Mera Dil. Aditi was not happy with these reports and clearly denied them.

TV stars and Aditi’s friends poured in congratulatory messages on her Instagram account after she announced it. Naagin 3 star Anita Hassanandani wrote that she had a feeling that Kabir and Additi would end up together a long time ago. Sukirti Khandpal, Pryanca Talukdar, Pooja Gor, Garima Jain, Shrenu Parikh have also sent in their congratulations. 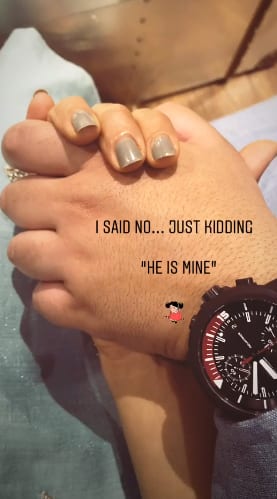 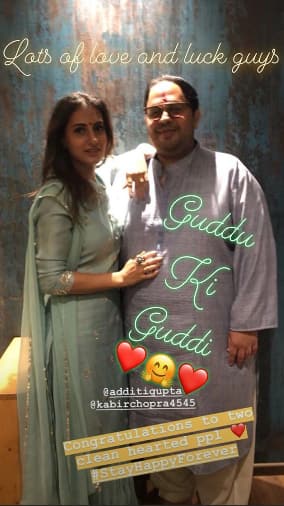 Both Aditi and Kabir looked beautiful together as they twinned in the shades of silver. It seems like her beau is a pilot as Pooja Gor hinted that they need to take flying lessons soon.

Aditi in her interview had previously said, “I don’t feel like I have to start planning about my marriage so early. But yes it is a wish of my parents who want to see me settled. Even the society, keep asking my parents about my marriage plans. Such questions are sometimes funny or else irritating. They also let you blush (laughs). I’m happily single after my breakup. But as of now I’m not dating anyone but enjoying my single status.”

Additi is known for her role in the show Kis Desh Main Hai Mera Dil where she played Heer opposite actor Harshad Chopda. She has reportedly been signed on for the second season of Kaal Bhairav Rahasya on Star Bharat opposite TV hunk Gautam Rode.

Many congratulations to the lovely couple!