A lot of celebrities suffered the same due to the lockdown. They stayed away from home and their family. Some did that on purpose as a safety precaution for their loved ones, and others had no choice. One such Bollywood celebrity was Jacqueline Fernandez as she had to stay away from her family for a long time of ten months. But looks like the actress finally united with her mother after all this while.

Actress Jacqueline Fernandez shared two short videos on her Instagram stories with her mother. As the mother daughter duo after a long period of ten months, they both looks super excited. The duo showcased their love for fitness as the first glimpse of their reunion is from a gym. The actress wrote, “Mum it’s been 10 months. I haven’t seen you!!!” on top of one of the videos. The two beauties looked adorable in the video and gave major mother-daughter fitness goals to the millenials. 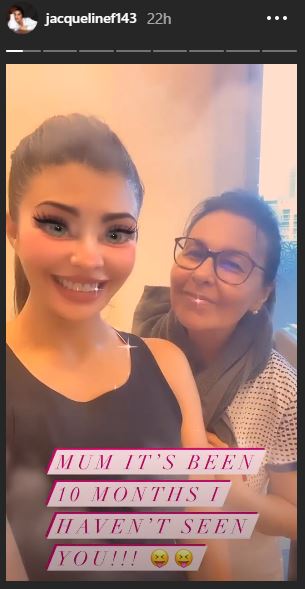 Jacqueline has always been very close to her mother. She has often displayed her love for her mother on her Instagram handle by sharing glimpses from their bonding sessions. Just a few days back, the actress shared a stunning picture from her childhood. In the picture we can see Jacqueline in a black outfit goofing around with her mother Kim Fernandez.

Jacqueline Fernandez will be next seen in the horror-comedy ‘Bhoot Police’, directed by Pawan Kripalani. Other than her the cast also includes Saif Ali Khan, Yami Gautam and Arjun Kapoor. She will also feature in ‘Kick 2’ co-starring Salman Khan.