Jahnvi Kapoor’s Shoes Cost Is Jaw-Dropping, But Seems Netizens Are Not Liking It

Janhvi Kapoor is the newest edition in the Bollywood industry where she stepped in the world of films with Karan Johar’s Dhadak. The film was a huge hit on the box-office and also collected 100 crores worldwide. This means Janhvi got a warm welcome from her fans and the audiences. And now, there’s no looking back.

Well, way before Jahnvi stepped into films, she was already popular among the buffs. She used to make a lot of appearances with her star mother Sridevi at various events. Just like Sridevi’s style was impeccable, so is Janhvi’s. The actress has been well taught by her mom how to dress up and seems she is exactly trying to follow her mother.

Jahnvi’s choice of outfits are really impressing the fashion critics and we are loving her all beautiful avatar every time she steps out.

But as we all know, not all days are good and sometimes being a celeb you have to face a backlash for your style. The same thing has happened with Janhvi recently. Actually, the actress was spotted back in the city with her younger sister Khushi Kapoor as hey return from Italy.

Jahnvi’s airport look was spot on. She wore a lavender v-necked top with denim and shades completed her overall casual look. But it was her shoes which caught everyone’s attention. The actress wore Gucci sneakers which did not please the buffs.

The pair of Flashtrek sneaker with removable crystals were not so appealing, however, your jaws will drop when you hear the cost of it. The shoes are priced at USD 1590. That is Rs 1.2 lakh in Indian currency. But even the hefty price tag could not impress netizens.

Withing no time, various reactions from the netizens started pouring in criticising Janhvi’s fashion sense and also about the shoe brand. 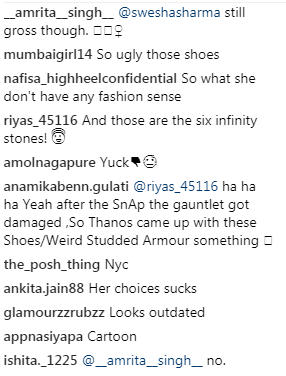 On the work front, Janhvi has bagged her next film which is a multi-starrer flick Takht.