Janhvi Shares Her Gorgeous Pic From Her Vacay; Says ‘I Fully Get The Hype’

After spending time with her loving sissy Khushi Kapoor in the US, Bollywood babe Janhvi Kapoor recently checked into her next holiday spot, which is also a hot favorite of the majority of Bollywood biggies. 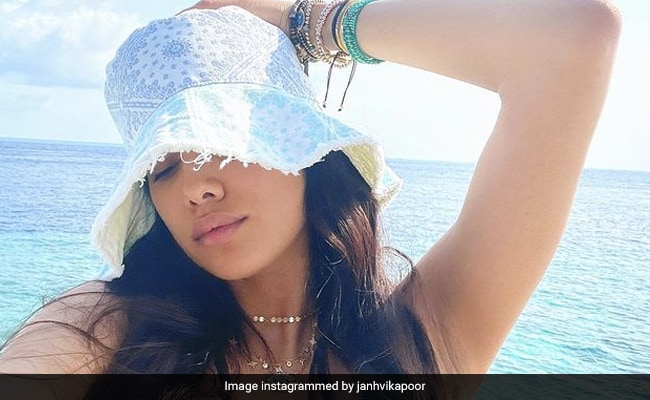 Yes, you guessed it right, it’s the Maldives. After reaching the cool destination, the Dhadak starlet has started sharing special glimpses from the island nation. Some of the images are adorable sun-kissed selfies, while others boast of the blue waters of the cool Island. She also posted some pics with her friends. Janhvi’s food pictures are delectable.

The first image showcased the actress relishing a spectacular sunset in a yellow blowy getup, whereas others were images with her friends. She shared a sunkissed selfie putting on a cool hat as well.

Janhvi gave a sassy caption to her post. “Last to get on the Maldives bandwagon but I fully get the hype.”

Some days back, Sridevi and Boney Kapoor’s daughter was in LA and she guaranteed her Instafam knew. While sharing the images from her break, she wrote: “It’s been a minute LA but you still feel like home.” ICYMI, see the photos here: In 2020, she was witnessed in Gunjan Saxena: The Kargil Girl that reached the audiences via streaming platform Netflix. In 2021, she starred in the horror comedy Roohi with Rajkummar Rao and Varun Sharma. Janhvi Kapoor made entry in the Hindi film industry with the 2018 movie Dhadak, opposite Ishaan Khatter. She was also a part of Netflix’s Ghost Stories. The actress’ line-up of movie comprises comedy Dostana 2, co-featuring Kartik Aaryan and Laksh Lalwani. The actress will also be seen in Karan Johar’s Takht. She will also be seen in Good Luck Jerry.