Janhvi Shares Pics With Team As She Wraps ‘Good Luck Jerry’; Says ‘Miss All Of You’

Bollywood actress Janhvi Kapoor has finished the filming schedule of her new project named, Good Luck Jerry. As the team has wrapped up the film project, the lead actress has expressed her happiness by sharing some exciting pictures from the sets. The ‘Roohi’ fame actress also wrote a special and heartwarming message about her learning curve while doing the said project. She had been filming for the picture in and around the state of Punjab for most of this year. One of the images shared by the actress features a lively Janhvi enjoying the colorful balloons as she throws them into the air. Janhvi can be seen putting on a simple green-colored Punjabi suit. A few other images showcase Sri Devi’s lovely daughter giving poses with the film’s crew members comprising one with a group of children. She also posted an image from her special birthday celebrations on sets earlier this month.

She also posted a mirror selfie with her personal squad for the film. The other photo showcases her posing with Samta Sudiksha. Samta also shared a couple of photographs on her Instagram stories. 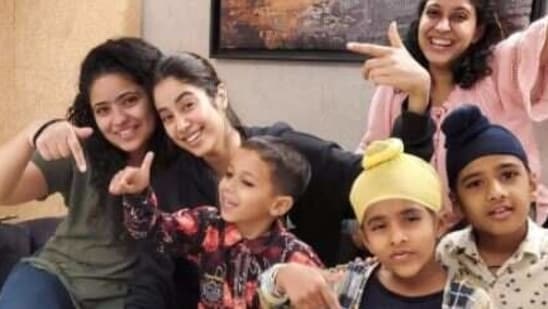 While posting the images on the social platforms, an elated diva also penned a special note that can be read as “I can’t believe it’s a film wrap. So many things have happened, changed, evolved, been learnt and unlearnt during the course of and because of this filming. But through all of it I used to be so excited to come to set and see all these faces and trouble them and laugh with them and work tirelessly and unitedly to create something that was exciting all of us. I’ll miss all of you – is a massive understatement. And thank you for everything.” The story of the movie is penned by Pankaj Matta. The director of Good Luck Jerry is Siddharth Sengupta. The flick also stars Mita Vashisht, Deepak Dobriyal and Sushant Singh in significant characters.