Bigg Boss 14’s most popular and delightful Jodi Aly Goni and Jasmin Bhasin aka Jasly have come up with their new video recording to make their fans say ‘awww’ yet again for their overloaded cuteness. Recently, the cutesy pair has created a video in which they can be seen recreating their fellow contenders and besties from the controversial reality show Rubina Dilaik and Abhinav Shukla’s latest music video.

Aly shared the video recording on his personal Insta handle and shared how he is in awe of Rubina Dilaik and Abhinav Shukla’s song. While captioning the video, he penned, “loved it” and he also praised the Bigg Boss 14 winner and her hubby, the singers as well as the producers of the song. 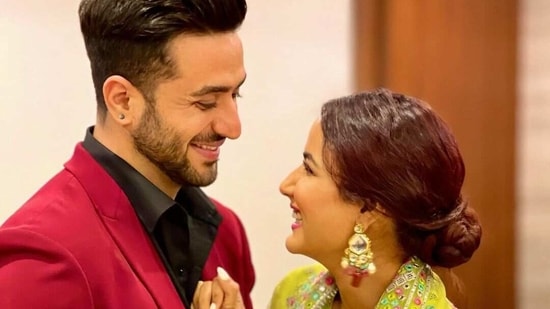 It seems that Aly and Jasmin mesmerize everyone with their delightful video recording. Rubina called their video as ‘awwwdorable.’ She also set the same as her Instagram story with some beautiful emojis. In the meantime, well-known music composer and singer Tony Kakkar penned, ‘Why so cute you both’ for Jasmin and Aly. Arshi Khan stated, “Dil to chahta hai me he karlu pyaar woow what a handsome boy sorry jasmine joking”

Jasmin and Aly were often seen putting on night wear with #jasly prints on it in the reality show and now the latest image of the pair is all over the social platform, where they are seen putting on track pants and t-shirt with #jasly written on it. The two can be seen flaunting the hashtag on their outfits.