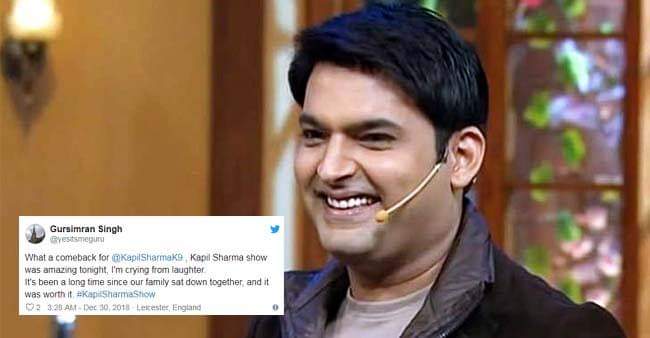 Along with his team Chandan Prabhakar, Kiku Sharda, and Sumona Chakravarti, Bharti Singh and Krushna Abhishek he returned to the screens. In a conversation, Bharti said that she approached Kapil Sharma and waited for about nine months to be a part of the show. Krushna Abhishek who has a tiff with Kapil Sharma in the past is also seen with him and is excited about the show. But the popular character of Sunil Grover is seen nowhere in the show as he is busy with his own show Kanpur Wale Khurannas.

When the show was premiered it achieved a lot of appreciation from the audience. Kapil managed to add a lot of punches and funny jokes which made the audience laugh at their topmost. He already gave a treat to all of us by having Ranveer Singh and Rohit Shetty on his 1st episode. Check out the reaction so some Twitterati’s :

What a comeback for @KapilSharmaK9 , Kapil Sharma show was amazing tonight, I'm crying from laughter.
It's been a long time since our family sat down together, and it was worth it. #KapilSharmaShow

My favorite show #TheKapilSharmaShow is back with full energy of @KapilSharmaK9. Now I have something to wait for during the week and watch in the weekend. What a come back!

Earlier, the trailer of the show was released by Sony TV on their Twitter handle. The trailer gave us a glimpse of the first episode which featured the Simmba team including Ranveer Singh, Sara Ali Khan, and Rohit Shetty. Earlier there was one more trailer which portrayed Salman Khan along with his father Salim Khan and brothers Arbaaz and Sohail Khan.