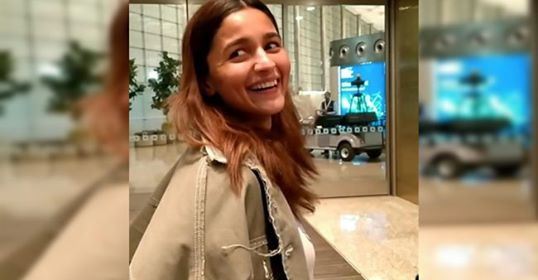 One of the most talented actresses of her period, Karisma Kapoor is an evergreen beauty. In her peak, she was the highest-paid actress of her time. From the 1990s to 2000s, Karisma reigned supreme in the whole decade. Even today, she remains one of the timeless beauties of that period.

The actress is currently in her 40s and is ageing like fine wine, getting more and more beautiful with each day. Even today, she can make her fans go weak in the knees, with her charm and grace. She keeps treating her loyal fans to various pictures of herself on Instagram, and despite being away from films for a long time now, she still enjoys a big fan following.

Keeping up with the trend of treating her fans, Karisma posted a beautiful picture on Instagram, seeing which, we cannot take our eyes off her. The Raja Hindustani actress looks timeless as ever in the snap, as she flaunts her messy hair for the camera.

Also worth noting here is that the red lipstick she’s carried in this picture, which adds a lot of sexiness to the pic. Even today, the actress commands respect and a huge fan following whenever she goes out. She is also seen going in and about the bay, hogging the sunlight as she gets papped by paparazzi.

Often, she is seen going out with her BFFs, Malaika Arora, Amrita Arora and her sister Kareena Kapoor Khan. She was also present for Kareena’s birthday, with her pictures with her nephew Taimur going viral.

Recently, she stood in for Kareena as the judge of the show Dance India Dance, while her sister was away with commercial promises.