Katrina Kaif enjoys her time on social media and as of late had the most fun interaction ever with an influencer. Freddy Birdy, who writes his thoughts on a well-known Instagram page which is followed by many celebrities, took a dig at Katrina Kaif’s cooking in his most recent post. He suggested a rundown of ‘simple’ recipes that Katrina can try cooking. 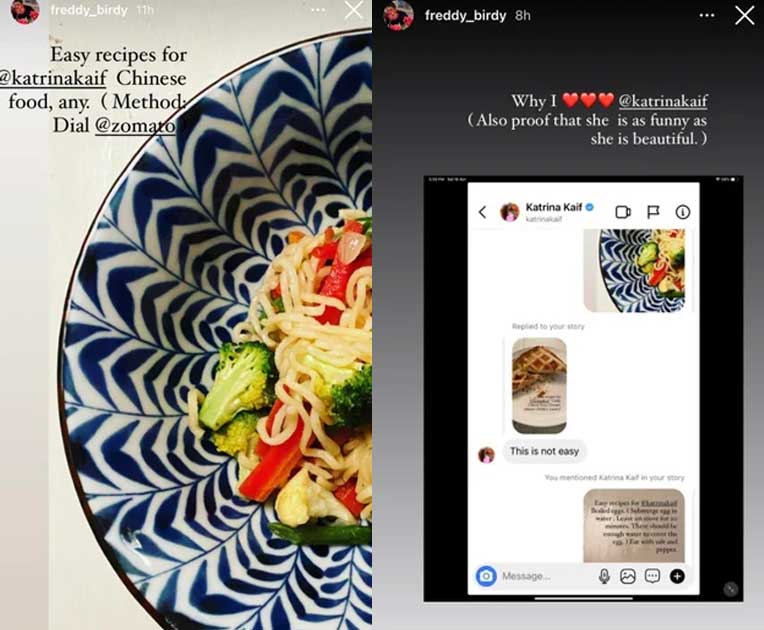 Responding to the recipe about chilly cheese toast, Katrina replied to the influencer, “This is not easy.” Freddy shared Katrina’s reply to his post and added, “Why I love Katrina Kaif. Also proof that she is as funny as she is beautiful.” Just a week ago, Katrina Kaif had flaunted her cooking skills as she made scrambled eggs for her spouse Vicky Kaushal. Not long after their wedding, the actress had prepared delicious looking Halwa, for the ‘chaunka chardhana’ ritual. In December 2021, Katrina Kaif and Vicky Kaushal got married ina lavish wedding ceremony hosted in Rajasthan. The couple’s family and close friends attended the celebration.

On the work front, Katrina will be seen in ‘Tiger 3’ with Salman Khan. She has also been shooting for Sriram Raghavan’s ‘Merry Christmas’ with Vijay Sethupathi and will also be seen in ‘Jee Le Zaara’ alongside Priyanka Chopra and Alia Bhatt.