Katrina Kaif’s Drives Off ‘Monday Blues’ With Her Infectious Smile Have you checked Bollywood beauty Katrina Kaif’s latest entry on her personal social media handle? The ‘Boom’ actress redefined “Monday blues” in her amazing way. Katrina was busy with the filming of her new project ‘Phone Bhoot’ in the state of Rajasthan during the month of February.

The 37 year old beauty has started her new week and new month i.e. March 2021 by posting two cutesy pics of herself. In the pics, the actress can be seen sporting an ensemble in diverse shades of blue.

Putting on a blue tee along with toning denim shorts, the Bharat actress can be witnessed sitting in a chair with a smiling pose. In her off-duty appearance and keeping things minimal and on point, she captioned the pics as, “Monday blues 💙”. Her fans and followers are in awe of her pictures.

Katrina will be seen opposite Siddhant Chaturvedi and Ishaan Khatter in Phone Bhoot. When they were filming in Udaipur, the actress too posted a video recording of herself and Siddhant enjoying “a very professional looking game of badminton with a little dancing mixed in” on the film sets. 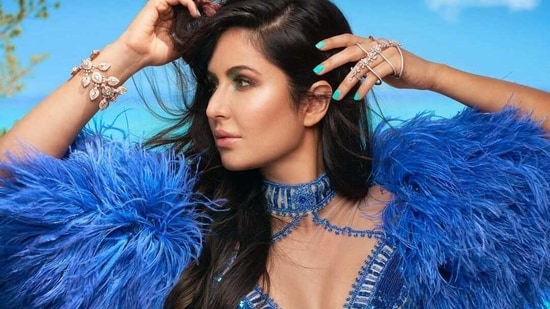 Together with the clip, she penned: “A very professional looking game of badminton with a little dancing mixed in. I promise Ishaan Khatter did get to play. Siddhant Chaturvedi graciously let it appear that I had the upper hand which definitely was not the case.”

Phone Bhoot, helmed by Gurmmeet Singh and produced under the banner of Excel Entertainment (Farhan Akhtar and Ritesh Sidhwani), is slated to release this year.

Katrina Kaif’s last movie was Ali Abbas Zafar’s Bharat, in which she was seen along with Salman Khan.