Khushi Kapoor has just brightened up our day with her latest photographs from the busy surroundings of New York. Filmmaker Boney Kapoor and ace actress Sridevi’s younger daughter, who is presently pursuing her acting course in New York came up with three new images of herself on her personal Insta handle today. 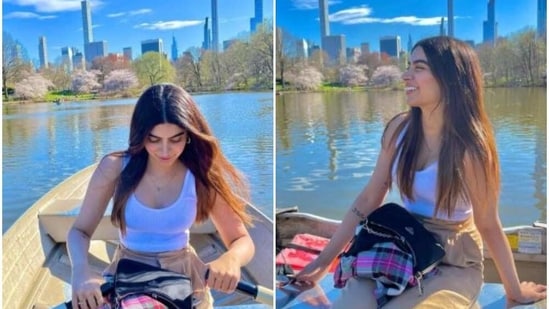 In the images shared by the star kid, Khushi can be witnessed in a cheerful mood. Along with the pics, she wrote: “Happy,” in its caption. Khushi’s loving sissy and Bollywood actress Janhvi Kapoor, in contrast, penned something completely opposed in the comment box of the post.

The ‘Dhadak’ actress wrote “Sad” in the comment box to which Khushi responded, “it’s ok me too.” The special post also got a comment from ace actress Sushmita Sen’s loving daughter Renee Sen and she dropped a heart emoji in the comment box.

Janhvi had paid a visit to the US to be with Khushi for a short period. At first, Janhvi was in LA and later she moved to New York. Khushi is ready to rock the Hindi film industry with her highly anticipated debut. While talking to media people, her film maker daddy Boney had said: “I have the resources, but I would rather have someone else launch her because I am her father and one tends to get indulgent. You can’t afford to do that as a filmmaker and nor is it good for the actor. I would want Khushi to find her own footing. She will be launched by someone I respect and someone I feel secure and safe about.”

In a 2020 video recording, Khushi had talked all about her family legacy. She stated that her family is in the film line however she have always just looked from the distance. She added that she will definitely love to join her family at some point in the coming time and she would like to prove her forte and her place before she jumps into working with her family.