Actor and self-proclaimed critic, Kamaal Rashid Khan has shared thoughts on Shah Rukh Khan’s collaboration with the South Indian director Atlee. As per the reports, Shah Rukh Khan will be working with Atlee on an upcoming project.

On Sunday, KRK took to his Twitter handle to share his thoughts on Shah Rukh Khan’s collaboration with Atlee. He shared a series of tweets and his first tweet read as “I really can’t understand that why SRK is doing a film with south director #Atlee who doesn’t know anything about Hindi audience choice. This is the biggest problem of #SRK that he is trusting makers instead of the story. People won’t accept him in masala films like #Pathan etc”.

In his follow-up tweet, he wrote “Even #SRK is doing the same mistake like other stars that he doesn’t want to become an old man at the age of 56 years also. He wants to do only Bholu cute boy role, which ppl won’t digest. Bollywood actors are having a phobia of doing young boy role to get the young actress in the film”.

“#SRK is a brilliant actor and he still can give big hit film of 500Cr business if he does right film. But unfortunately, he is doing the wrong films. I really love him, so I feel really bad for his choice of bad films. And he will get angry like other actors when I will give bad review”, KRK added.

KRK has criticized Shah Rukh Khan amid his legal battle with Salman Khan. Recently, KRK was slammed with a defamation case and it was filed by the legal team of Salman Khan over allegations of money laundering against the actor. 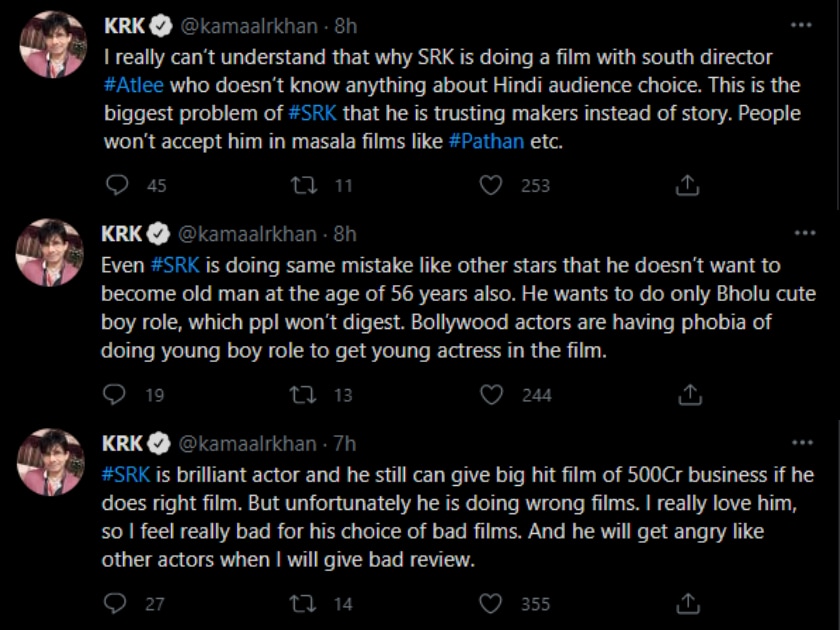