Lock Upp victor Munawar Faruqui’s most recent post served as an eye-opener for the fans of Munjali, the fanmade name for Munwar and his Lock Upp co-contestant Anjali Arora. Day after the show reached an end and Munawar walked away with the winner’s trophy, the comedian shared a pic with an unknown lady on his Instagram Stories. He however, hid a part of her face with a heart emoticon.

Munawar alos added Diljit Dosanjh’s song Lover to the post. He wrote, “Bubby Bubby tera ni mai.” Munawar was close to Anjali on Lock Upp but had also indicated having a girlfriend in real life. He addressed her as Bubby whenever he talked about her. 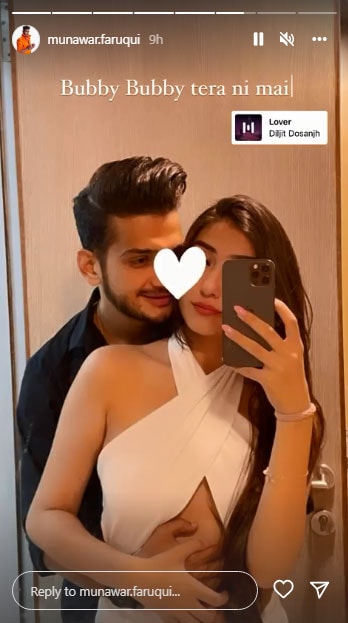 Munawar won the Lock Upp trophy alongside a cash prize of  ₹20 lakh and a car, Anjali was named the second runner-up. Payal Rohatgi was declared the first runner-up.

During his time on Lock Upp, an image of Munawar with his estranged wife and son had also gone viral. Kangana had shown the image to him on the show, asking him for a clarification. He had said, “I am not hiding anything, but we have been separate for the past one and a half years. Court ki cheezein ho rahi hain (The matter is in the court) and I do not want to discuss that. It has been difficult.”