Giving celebrity couple goals to all, here is the most popular couple on the list Arjun Kapoor and Malaika Arora who has become a major topic of discussion due to their hidden chemistry. They have not made anything official but something their hem and haw answering gives us a clear indication that something really fishy is going between the two. Their unclear answers though reveals a lot about their ongoing relationship status with their multiple outing pictures and hidden vacays where they were found walking hand in hand, gives a true indication about their love.

The duo’s picture has always reflected some kind of positive bond which they both share with each other. And in an astonishing way, the pictures were meme a lot stating that they are tying knots and blah blah… Well, with the wedding season queuing in Bollywood, we can think that they will also announce deep secrets of their relationship status turning into matrimonial one. As per reports a close friend to the couple has openly said on the rumors but nothing takes away from the fact that they many a time are seen together.

Today, leaving all the things behind we are here to share you something that we found eye catchy for all of us. Yes, when Arjun shared his picture from the Halloween celebration where he shared a pic of himself that was edited by his insta fan account and on this picture the crystal clear comment of Malaika again left us hinted…She commented the fire emoji on the picture. 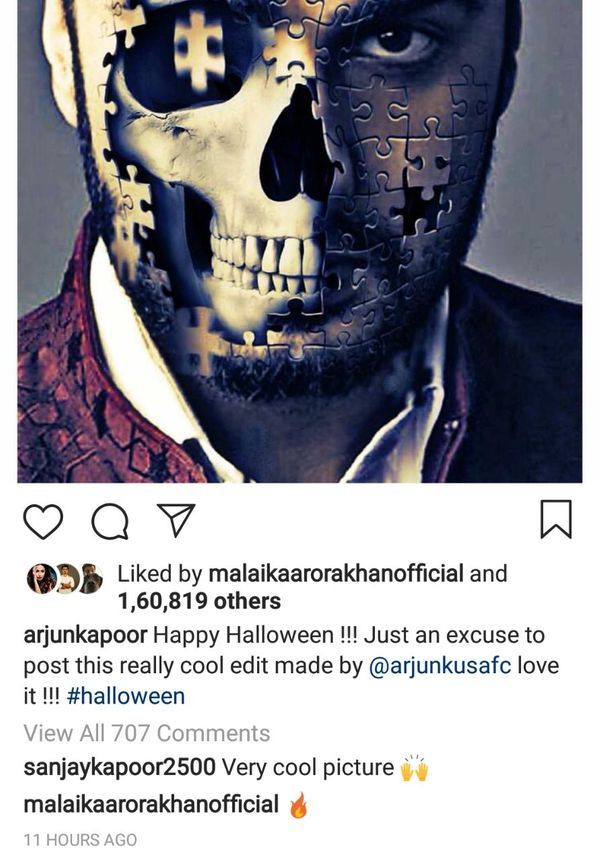 Earlier, an insider had told to DNA, “Arjun and Malaika have started spending quality time together. They are extremely fond of each other and are exploring their beautiful relationship. Let’s not jump here. We should just let them be. Marriage is definitely not on the cards anytime soon for them.”