Meet this real life Rapunzel who did not cut her hair since 28 years, her pics are beautiful 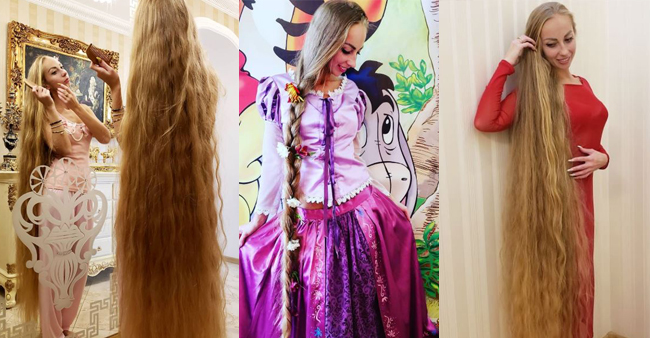 Well, hair defines the beauty of a woman and even its been said by elders that long hair draws more energy to the brain. And if we are talking about long hair how one can we forget the fairytale popular character Rapunzel, the girl who let down her long hair. And thus leaving us to envy with such bulky beautiful long hair braid.

You must be thinking why we are talking about the character, so let me spill the beans. Just like Rapunzel, we have a woman who took Rapunzel so seriously that she has not taken a haircut for 28 years… Yes, that’s not hearsay, a woman named Alena Kravchenko is with almost 2 meters long brunette. Nothing could be more beautiful in a girl than he natural hair and that too with volume bulky length is icing on the cake.

When she was a teenage girl, Alena Kravchenko’s hair had already reached halfway down her back, and by her early 20s, it reached waist, then her knees, and in her early 30s, it even started touching the floor. She believes that her long hair is part of her identity and without them, it would be difficult for her to identify herself.

The woman in an interview said, “It’s now become a bit of a treat to let my hair down, because it is far more comfortable, as in a bun it can be quite heavy.”

Alena describes herself as a “humble person” and also said that she loves being compared to Grimm’s character and popular Disney princess Rapunzel. She does enjoy seeing the astonished look on people’s faces on the rare occasions she lets her hair down in public like Rapunzel.

But the woman is way beyond the records as the world’s longest hair belongs to a Chinese lady named Xie Qiuping whose hair length is 5.627 meters nearly equal to the height of Giraffe.