Parineeti Chopra’s latest photoshoot is all about dummy backgrounds:  From Switzerland to snow set-up 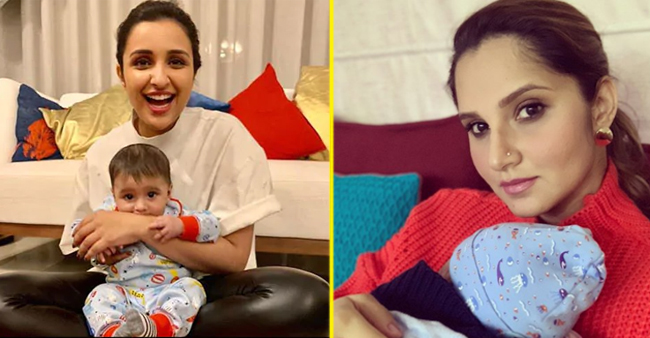 The most talented and beautiful actress Parineeti Chopra is having fun of its kind posing for the cameras in the name of photoshoots.  The actress who was last seen in Kesri opposite Akshay Kumar has shared a funny video that shows the reality behind the snow photoshoots of the actresses.  The video showcases how the fake things are set up to make a professional photoshoot.

In the video she shared, Parineeti is seen wearing a green sari with silver pencil heel shooting in a snow set-up with the song Humko Humise Chura Lo from the movie Mohabbatein playing in the background. The actress shared the video and captioned it hilariously saying, “Yashraj heroine tutorial:— Fake Switzerland in Madh Island. Fake snow in 34 degrees heat. Fake wind. One mohabbatein song. But one REAL FILMY girl! Couldn’t stop laughing after this shot.”

The video clip truely depicts how the professional photographers create fake backgrounds to make an outstanding photoshoot.  On the professional front, Parineeti will be seen sharing screen space with Sidharth Malhotra for the second time in Prashant Singh’s romantic comedy, Jabariya Jodi. They earlier did Hasee Toh Phasee.  Parineeti will also be seen in Sandeep Aur Pinky Faraar with Arjun Kapoor directed by Dibakar Banerjee.  Earlier the duo did Ishaqzaade.

Parineeti will also be seen playing the lead role in the Saina Nehwal biopic.  She is currently busy with her training sessions and is updating her fans with the pictures from the sessions often.  Parineeti has so many films in her bag this year and she might even sign more projects in the coming future.

Not so recently, Parineeti announced that she will be headlining the Hindi adaptation of Girl On Train. She wrote, “Excited, nervous but honoured to be filling in the shoes of #EmilyBlunt for the hindi adaptation of “Girl on the Train”. BLESSED.”  Other than these prestigious projects, Parineeti will also star in Bhuj: The Pride of India alongside Ajay Devgn and Sonakshi Sinha.