Television is an important part of our life as we get to know about various things happening around the world. Apart from that, TV has progressed a lot and also provides a wide range of entertainment to the viewers. Earlier, there were just a few TV shows in a particular genre but now, we get to see so many kinds of serials and reality shows as per the taste of an individual.

Well, in recent years, we saw some amazing serials which became a huge hit among the fans. Well, they had to be as they were loosely based on our very favorite Bollywood flicks.

Yes, you heard it right! Indian television witnessed many shows which were based on Bollywood movies and received a good response from the viewers too.

So let’s take a look at the list of these shows: 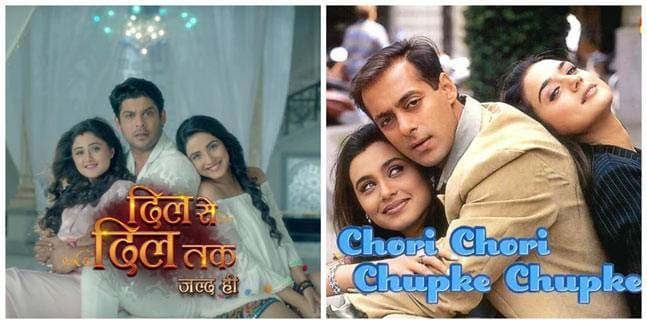 The show is based on popular Bollywood flick Chori Chori Chupke Chupke which starred Rani Mukerji, Salman Khan and Preity Zinta in the lead roles. As per the movie’s concept which was based on surrogacy, the show too adopted the same storyline with a beautiful star cast of Rashami Desai, Sidharth Shukla and Jasmin Bhasin playing the lead roles. It became quite a hit among the buffs. Subhash Ghai’s movie Pardes was a huge hit back then when it released with newbie Mahima Choudhary and Shah Rukh Khan playing the lead roles. The TV adaption was also based on how Drashti Dhami and Arjun Bijlani meet in a foreign land and fall in love.

The historical drama was inspired by Sanjay Leela Bhansali’s magnum opus Bajirao Mastani which was a blockbuster hit. The show too was based on the Maratha warrior Peshwa Bajirao and his bravery.

Ashutosh Gowariker’s historical drama starring Hrithik Roshan and Aishwarya Rai Bachchan won hearts. Ekta Kapoor came up with the film’s TV adaption starring Rajat Tokas and Paridhi Sharma and it was a huge hit among the fans. The show ruled the TRP charts for a good two years before its end.

Ekta Kapoor presented Naagins series which was based on Bollywood flick Naagin starring Sridevi and Rishi Kapoor which was a blockbuster hit. The story of the show and the movie looks similar, as the protagonist is a woman who is a shape-shifting serpent, who enters a wealthy man’s house to take revenge. After two successful seasons starring Mouni Roy, the makers are back with its third season.