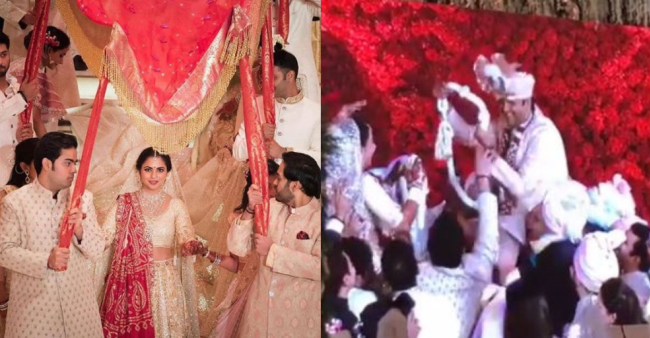 We have often seen stars falling in love with each other while working together in films, TV show, ad commercials. Bollywood has witnessed some evergreen which rocked on the screen and then ended up getting married in real life too.
But there are many celebs who chose to find their life partners outside Bollywood. However, some of the celebs already dated actors before they finally got hitched to the outsiders. Seems after having a bitter experience with the actors, they chose to marry a person from the non-filmy background.

Take a look at stars who married outside Bollywood:

Shahid had a series of affairs with almost with all his co-stars like Kareena Kapoor Khan, Priyanka Chopra, and Sonakshi Sinha among others. However, after having a major failed relationship with Bollywood divas, the actor went on to have an arranged marriage with a Delhi-based girl Mira Rajput.

The actress after having two failed relationships one with director Punit Malhotra and another with model Sahir Berry finally settled down with a Delhi-based businessman Anand Ahuja. After Sonam’s previous relationships with Punit and Sahir ended on a bad note, the actress vowed never to date or marry an actor.

The bad boy and the serial kisser of Bollywood was quite a simple man in real life. Emraan was never linked with any of his co-stars even before or after marriage. The actor went on to marry his childhood sweetheart Parveen, who doesn’t belong to the film industry and is happy with her.

The handsome hunk dated Bollywood’s bombshell Bipasha Basu for a brief period and broke off. John then settled down with ladylove Priya, who doesn’t belong to film background. The couple is happily married since 2014.

The chocolate boy of Bollywood after dating Aishwarya Rai Bachchan and later parting ways decided to never involve with any actress. Vivek opted for an arranged marriage with Karnataka’s politician’s daughter Priyanka Alva. The couple is living in a happy space since then.

The cute boy of Bollywood was already committed to Avantika way before he stepped into films. After dating Avantika for a long time, the couple got married in 2011 and is blessed with a baby girl.
Just like them, there are many other Bollywood personalities who found love outside the film industry and are now happily married to them.

The superstar of Bollywood is ruling several hearts but there’s one lady who rules his heart and it’s none other than Gauri Chibber, now Gauri Khan. SRK belong to showbiz but Gauri didn’t. Today, they are one of the most happening couples of Bollywood.