There is no denying that Priyanka Chopra has become a trendsetter for girls around the world. She grabs all the attention with her fashion sense. Priyanka and Nick Jonas are one of the most stylish couples at the moment. Right from the dinner dates to the red carpet appearances, the couple has been an inspiration to their followers.

The Quantico actress who got recently engaged to Nick Jonas has already the paparazzi attention and it seems that she has gotten Wolverine actor Hugh Jackman smitten as well.

A picture was clicked at the Golden Heart Awards in which Hugh Jackman was caught staring at the Quantico actress while she interacted with the guests at the event. 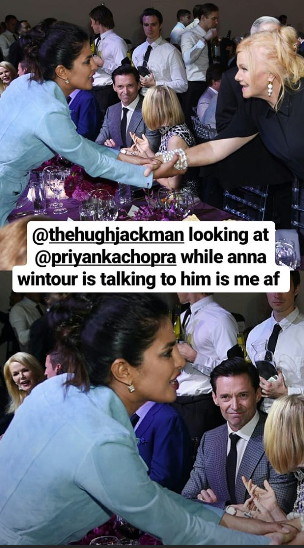 The actor who was portrayed in the Hollywood movie X-Men was seen interacting with Vogue magazine’s editor-in-chief Anna Wintour. But as soon as Priyanka entered, Jackman began Baywatch-ing the gorgeous actress while Wintour continued her conversation.

The actress stunned everyone with her looks. She was wearing a blue suede dress by Michael Kors which was paired with a stone-studded necklace, golden-strappy heels and a cute pouch like a handbag. Her hair was tied up in a bun which added a classy look to her outfit. Her outfit and the way she carried it almost grabbed all the attention.

Priyanka and Meghan are very close friends. During the event, she also shares that she was ‘ excited’ for Meghan Markle after the Kensington Palace that the Duchess of Sussex is all set to be a mother. Priyanka also attended the former Suits actress wedding to Prince Harry in May this year.

We all know that the wedding theme is running around in the industry and fans are very much awaited to see Priyanka and Nick getting married. We are eagerly waiting to see Meghan making some time to attend Priyanka’s destination wedding.