Bollywood stars and real-life lovers Kriti Kharbanda and Pulkit Samrat recently opened up about their love relationship in the public.

Clearing up all the hearsays, the couple accepted their relationship and now the two stars seem to be raising the bar for social media PDA with adorable posts.

If you are speculating what we are discussing, the delightful image by the Housefull 4 will clear all your qualms.

Kriti shared an image in which Kriti Kharbanda and Pulkit Samrat can be witnessed putting on splendid ethnic numbers and are giving poses against a beautiful sunset at a beach. Together with the image, Kriti shared three shinning heart emojis.

A lot of her followers on the social platform praised the two lovers with their affection and good wishes.

One user commented, “Wow..looking gorgeous like always” in the meantime, another user wrote, “Made in Heaven” 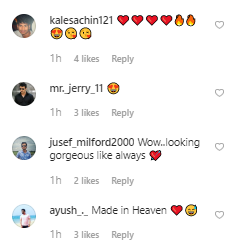 This is not the first the diva has flaunted her relationship with adorable posts.

Of late, Kriti posted an image at the same location and together with it she disclosed that it was her beau Pulkit who took the lovely image.

She wrote, “Everything about this picture is filmy, including the photographer! @pulkitsamrat to sunsets and more!”

Pulkit also posted some of the adorable pics along with his lady love.