Pulkit Samrat Wishes Birthday To His Ladylove Kriti; Pens ‘Life Is Fun With You’

‘Housefull 4’ actress Kriti Kharbanda is celebrating her 30th birthday today. The gorgeous beauty is enjoying her special day with the love of her life Pulkit Samrat with whom she is in a relationship since last year. Congratulating his ladylove, an elated beau Pulkit has shared a special and adorable wish for his girl friend on his Insta handle.

The photo that Pulkit posted is love-filled where Pulkit looks handsome as usual and Kriti radiates glow with her cute face and bright smile. The picture seems to have been taken at some party. While Pulkit’s red goggles and white-striped coat look great, Kriti looks beautiful in a red saree. Have a look at the picture below: 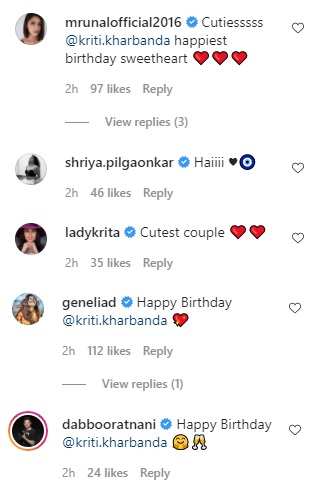 Defining his bond with Kriti, Pulkit expressed happiness and called himself lucky as he got her in his life. The dashing actor stated, ”She grounds me, she completes me. I hope I have done something good and that’s why I have found her.” The couple has been giving strong couple goals and their Instagram feed is proof of the same. The actor said that God has blessed them with loads of good work at this time, so they have decided to concentrate on that.

Kriti and Pulkit have worked in 3 projects together that include ‘Veere Ki Wedding’, ‘Pagalpanti’ and ‘Taish’. Both Kriti and Pulkit’s latest film Taish is streaming on ZEE5. The thriller, directed by Bejoy Nambiar, also stars Jim Sarbh, Sanjeeda Shaikh and Harshvardhan Rane. We wish Kriti a very happy birthday.