The student of the year girl Alia Bhatt who was shuttling between her plum projects finally got few days from her hectic schedule and visited rumoured boyfriend Ranbir Kapoor’s ailing father and veteran actor Rishi Kapoor in New York City. Rishi Kapoor is undergoing his medical treatment, Alia had a whale of a time in New-York with beau Ranbir Kapoor.

Pictures on social media are making rounds as Alia is spending some quality time with Ranbir Kapoor and its all open to the media and world. We spill the beans on all of their New-York galleries whether the love ones were roaming on the street on or were shopping, we brought every minute thing of their relationship to you.

But now we are here to reveal you that who is accompanying the Raazi girl on her return flight. Taking her trip of New York to Instagram the girl bid a bye to the city and also shared a picture of her travel company. 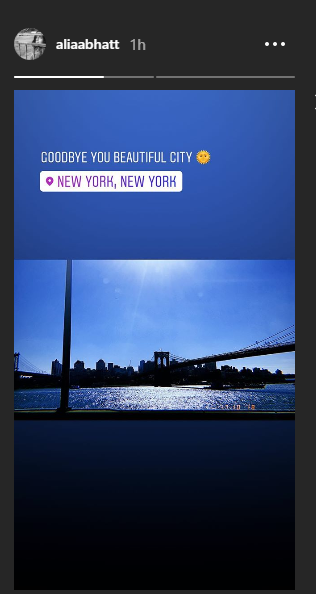 She was all hooked up with a book named ‘By myself and then some’ by Lauren Bacall, where Lauren brings all her 2-years flashback, including her filmy career and fonds of many close and intimate friendships and relationships.

This is not the first time when Alia is Face-timing Kapoor’s family, even in the last rites of Krishna Raj Kapoor she made her presence.

The girl was also snapped with Priyanka Chopra in New-York street where the divas were hitting the media with their sizzling appearance.

Stay tuned with Laughing Colours to know more about your favorite stars.