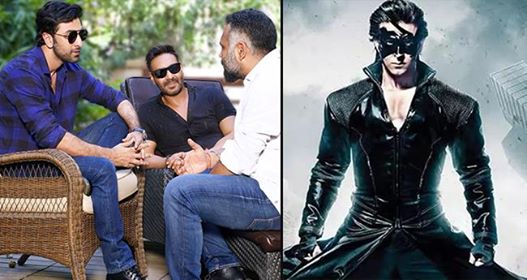 Ranbir Kapoor is currently one of the most demanded actors in the industry. The actor has proved his worth in the industry with movies like Wake Up Sid, Yeh Jawaani Hai Deewani and Tamasha. Ranbir’s latest film Sanju has impressed the audience and the film is roaring at the box-office.

A few days back, the news of Ajay Devgan and Ranbir Kapoor working on a film were confirmed. The director, who has previously helmed Pyaar Ka Punchnama and Sonu Ke Titu Ki Sweety, has cast Ranbir alongside Ajay Devgn.

The director has zeroed down on December 25, 2020, as the date on which the films will hit the screens. According to trade analyst Taran Adarsh, the project is likely to go on floors sometime mid next year. The film brings together Ranbir and Ajay after a gap of 8 years. The duo last shared screen space in the political drama Rajneeti.

A source of a leading news agency has been quoted as saying, “The team is excited to collaborate with the two powerhouse performers. When Ajay and Ranbir had last worked together, the latter was relatively new to the industry. Also, they didn’t really share much screen time in Raajneeti. So, this will be something that fans of both the stars will look out for.”

The film will clash with Hrithik Roshan’s Krrish 4. Roshan had taken to Twitter on Hrithik’s birthday to announce the film’s release date. He had written, “Today is perhaps the best day to make the release day of Krrish 4 official. Christmas 2020 it is. A gift for all of you on Hrithiks birthday. Happy birthday @iHrithik.”

Today is perhaps the best day to make the release day of Krrish 4 official. Christmas 2020 it is. A gift for all of you on Hrithiks birthday. Happy birthday @iHrithik

Ranbir Kapoor will be seen next in Bramhastra opposite Alia Bhatt and Mouni Roy. Bramhastra will be a three-film trilogy by Ayan Mukherjee.