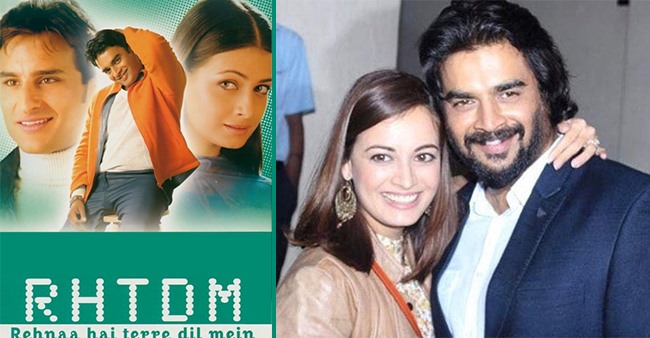 A film in the 2000s won plenty of hearts with its high-voltage romantic drama. The younger generation still finds the Bollywood flick starring R Madhavan, Dia Mirza and Saif Ali Khan to be an iconic love story. The names of the cast are enough for the cinema fans to go down memory lane and remember the beautiful romantic movie, Rehnaa Hai Terre Dil Mein.

The film had a young guy possessing less wealth but more love, a girl searching for her perfect partner, and a rich, handsome guy who is coincidentally a tough competitor of the other guy since their college days. Ultimately love wins over everything, but not before some breathtaking twists and turns. To add to the story and acting, the film had music that touched tons of hearts and is still considered as pure love songs.

RHTDM released in the year 2001, but at that time, it was a dud at the box office. Madhavan was a newcomer then. But his acting, his magical smile and his screen presence were enough for him to take a position in the viewers’ mind as well as the industry.

After nineteen years of the movie have passed, Madhavan is a star of Indian cinema. He has played several unforgettable roles in Hindi and Tamil movies.

The actor spoke about the film. “When the film released, it was a flop. They called it a disaster. But after it got out from the theatres, it slowly became iconic in nature. Now, everybody is putting the songs up, and singing and dancing to it,” said the actor. He thanked the audience for loving him as Maddy in RHTDM then and even now.