It was on April 30, 2020, when Bollywood lost one of it’s very precious gems, Rishi Kapoor. It was at that time when the actor’s daughter, Riddhima Kapoor Sahni had flied to Mumbai from Delhi to be by her family’s side and say a final goodbye to her father.

Due to the lockdown and whole country under strict guidelines, Riddhima was unable to attend her father’s last rites. That’s why , she reached Mumbai for his prayer meet for which she drove down from Delhi to Mumbai. And now, after almost 6 months of her stay in Mumbai, the entrepreneur is going back to Delhi with her daughter Samaira. 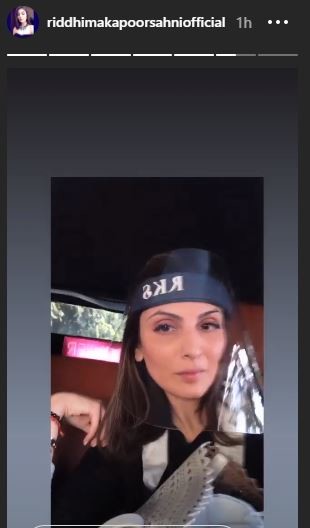 It was on November 11, 2020, when Riddhima took to her Instagram handle and shared a few glimpses from the airport. The first picture on her Instagram story was from an empty Mumbai airport. After that, she also shared a boomerang video from her car ride towards the airport. In the video, she is seen along with her daughter Samaira, wearing the transparent face shield.

Riddhima also took to her Instagram handle and shared a thoughtful quote along with a picture. With the quote and and the picture, she also wrote “Mumbai I will be back soon” over it, assuring she’ll be back to Mumbai soon.

And to top all these picture, she shared a beautiful picture with her actress mother, Neetu Kapoor. She also wrote “Love” and added a red heart on top of the picture. Riddhima Kapoor stood like a rock for her family after her father passed away. She kept her mother and rest of the family company for almost last 6-7 months. And while she stayed in Mumbai, she shared several unseen pictures with of her family including her father giving out some unknown deets. She also celebrated her mother, brother Ranbir Kapoor and her birthday, pictures of which were seen on the internet.

Salim Khan explains the reason why Salman Khan used to get beaten-up the most among his siblings...