Ranbir Kapoor’s sister Riddhima Kapoor Sahni’s Insta handle is crammed with love-filled unseen moments of the Kapoor family. Riddhima keeps on sharing the unseen throwback pics remembering her loving dad, Rishi Kapoor. The star daughter has taken her fans and admirers down the memory lane a number of times by sharing adorable and loving images of her parents, grandparents, brother, cousins and so on, from different occasions. 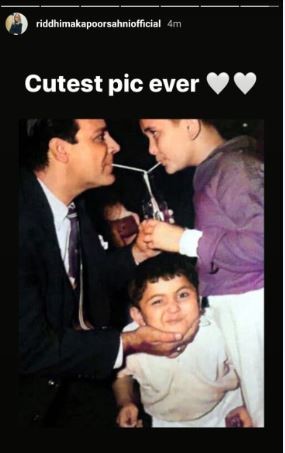 Now, Riddhima, who is in Mumbai with her mom, has posted a super adorable pic of her loving and doting papa, Rishi Kapoor. Riddhima shared a major throwback photograph of her father via her Instagram story on Thursday. Along with the photo, she wrote, “Cutest pic ever.” And we agree.

In the photograph, little Rishi Kapoor is seen putting on a white tee. He sports a goofy expression and is seen resting his face on the hand of a man. We are really sure that Rishi’s buffs will be grateful to Riddhima for sharing such an unseen image.

Riddhima Kapoor recently commemorated her mom Neetu Kapoor’s birth anniversary, where she beautified the entire residence and made this instant one unforgettable memory to be beloved for years to come. Her brother Ranbir Kapoor also joined them on mom’s big day. Riddhima posted these birthday celebration pictures on her Instagram stories.