The fairytale wedding festivities of Deepika Padukone and Ranveer Singh ended on a great note with the couple sharing some of the loveliest snaps on their social media accounts. The couple got hitched as per Konkani and Sindhi rituals on 14th and 15th November at Lake Como in Italy.

Since the time the couple has shared all their inside wedding pictures, fans are left awestruck looking at Deepika who looks simply like a dream in both her weddings. Much has been talked about her Konkani wedding where she dressed up in a beautiful Kanjeevaram Saree with a heavy jewelry.

We all know that ace fashion designer Sabyasachi Mukherjee designed all her and Ranveer’s wedding and other outfits. But there’s a slight twist in the tale which Sabyasachi himself made it clear.

The designer took to his Instagram account and revealed that Deepika’s saree for the Konkani wedding was a gift from her mother and was given to him by Ujjala Padukone for more work. So this basically means that he has not entirely designed DP’s Konkani wedding outfit.

He also gave the credit from where the saree was initially bought by sharing a picture and captioned it, “Thank you Shefalee Vasudev @shefatwork @thevofashion for aligning the information. #Sabyasachi #TheWorldOfSabyasachi”

In another pic of Ranveer and Deepika, Sabyasachi mentioned in the caption that it was given to DP by her mother Ujjala.

Shefalee Vasudev, the Editor of The Voice Of Fashion, has finally revealed the details about Deepika’s saree from her Konkani wedding by sharing a snap of the couple.

Her note could be further read as, “He added that the veil was not theirs and the sari had been duly purchased from their store by Deepika herself along with another sari and there was no commercial or personal arrangement behind it. When I brought it to the notice of @sabyasachiofficial with Radharaman’s permission, the designer instantly responded that it was indeed given by the bride’s mother to them. They trimmed and styled it. @sabyasachiofficial also added with grace and clarity about credit where due that while the sari’s details were not known earlier, once the store name has been brought to their notice and after it is verified, it must be rightfully credited.”

Here is a closer look at Deepika’s beautiful saree… 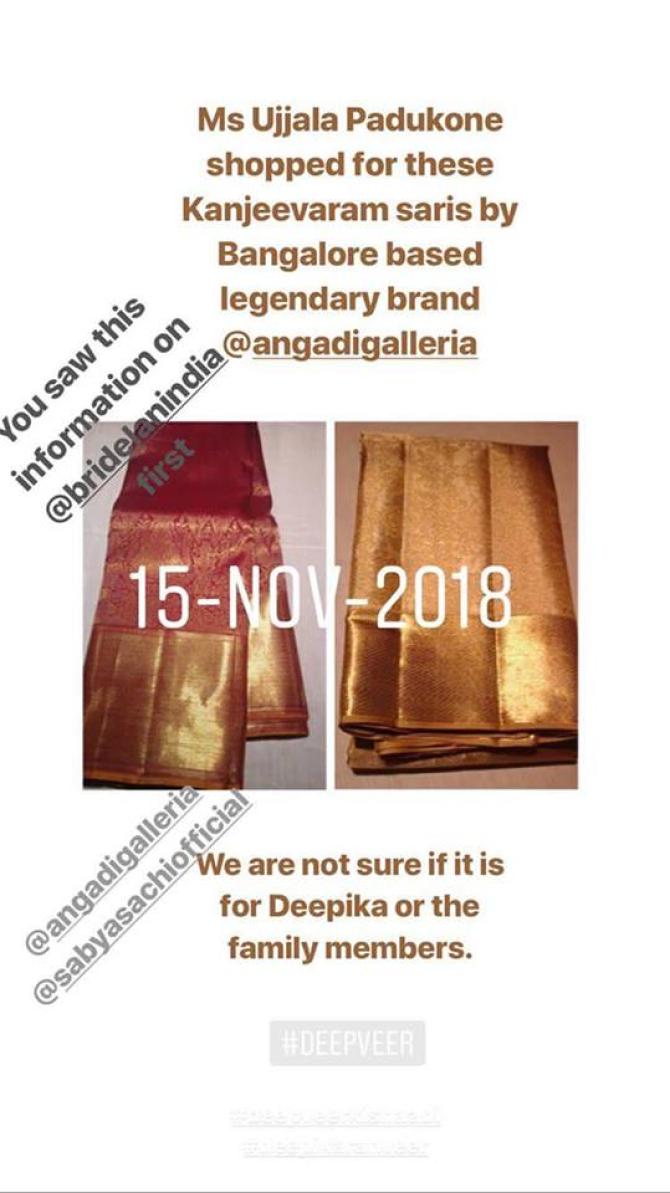 As we all know, the newlyweds have landed back in the country and are all set for their post-wedding celebrations which will kick-start today in Banglore. The couple will be hosting their first wedding reception today at a plush hotel in Banglore which happens to be Deepika’s hometown. A lot of close family and friends of DP are invited for this function. Well, the rest of the details are already known to us.