A father is always his son’s first hero, whom the son had idolised throughout his growing years. Father is the one who teaches him to ride his bicycle for the first time, and father is the one helps him to take important decision in his career. From highs of your life to the lows, it’s your father who will always stand strong by your side.

A father is always there to guide and protect his children throughout their lives. And that is exactly the kind of relationship shared between Sachin Tendulkar and his kids, Sara Tendulkar and Arjun Tendulkar. Both the Tendulkar kids have followed the footsteps of their parents. While Sara had followed her mother’s footsteps by choosing medicine as her profession, Arjun has taken cricket as his profession.

Arjun Tendulkar had made his T-20 Mumbai league debut last year where his performance was highly appreciated. He had proved once and for all that cricket is in his genes. And we must say that Arjun not only followed his father’s footsteps without any mistakes, he is also Sachin’s carbon copy.

To prove the same, the ‘God of Cricket’ shared a picture with his lovely son. It was on December 3, 2020, when Sachin took to his Instagram handle and shared pictures from his vacation. In one of the pictures shared by him, we can see his son posing beside him with striking features very similar to his father. Sachin captioned the pictures as “Vacation Vibes.” 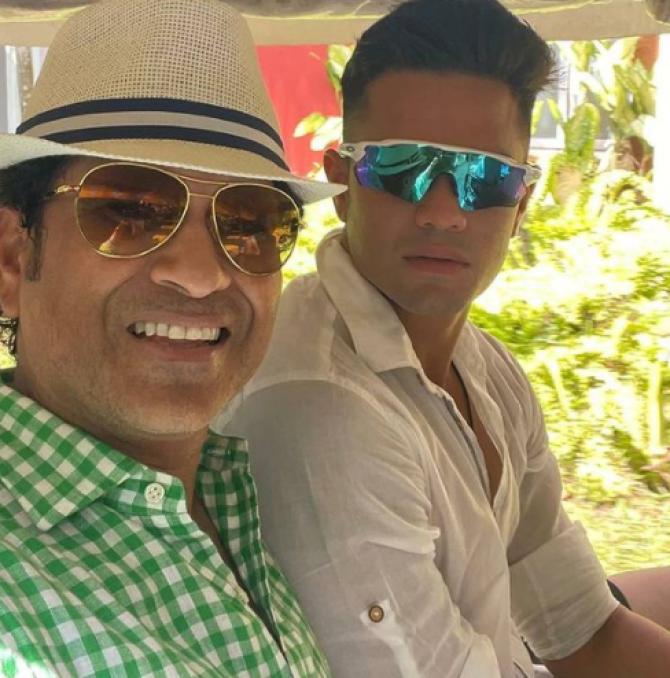 Talking about the ‘God of Cricet,’ Sachin Tendulkar, he had started his career at the age of 16 and had become a role model for every cricket lover. In his 24 years of career, his achievements are immense and he is considered as an inspiration by millions. Sachin Tendulkar had married the love of his life, Anjali Tendulkar and the beautiful couple are proud parents of their kids, Sara and Arjun.