Bollywood actress Sara Ali Khan shared a special note talking about the things that she finds familiar in her abba Saif Ali Khan and Sushant Singh Rajput. On July 24, 2020, Sara Ali Khan shared two images of her abba Saif Ali Khan with Sushant Singh Rajput. The picture got clicked when they were filming Dil Bechara in Paris. In the image, we can also see Dil Bechara’s main female lead Sanjana Sanghi and the film’s director, Mukesh Chhabra. 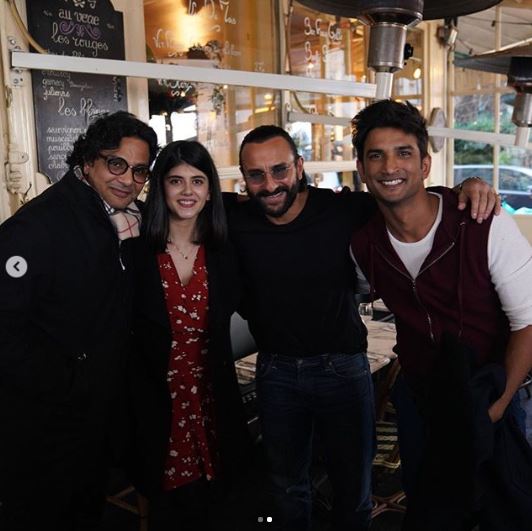 Together with the pictures, Sara Ali Khan penned a heartfelt note for Sushant Singh Rajput. The actress disclosed the last thing she found common between him and her dad and it can be read as, “The only two gentlemen that have spoken to me about Sartre, Van Gogh, telescopes and constellations, guitars, The Northern Lights, cricket, Pink Floyd, Nusrat Saab, and acting techniques. This is to the last thing you two have in common- #DilBechara Now on Disney Hotstar.”

Sara entered Bollywood with the film Kedarnath and she was seen opposite Sushant Singh Rajput. Their interpersonal chemistry became the talk of the town. On the actor’s 33rd birthday, Sara, who was in Dehradun with her mom Amrita Singh, came back to be with Sushant.

As per a report, “She dropped by his apartment at night with a cake, and they went on for dinner together after that. Sushant then dropped Sara home, and they snuck in some quality time together.” A source has once said no to all the hearsays about the two dating. The source stated, “There is nothing true in these reports, Sushant is only her close friend and they both always stay in touch. But they both are definitely not dating each other.”

But, another report added, “Sara and Sushant were very fond of each other, maybe it was too good that it won’t last. The arguments were only minor, and one felt that they would beat the low tide, but recently, their differences acquired loud overtones. Things finally came to a sorry pass when they suddenly stopped talking to each other.”

After this, the news reports started linking Sara’s name with Kartik Aaryan.