A recent photo of Aryan Khan, Shah Rukh Khan’s elder son, has gone viral. The photo was taken at Aryan’s graduation. The celebrity son graduated from the University of Southern California and can be seen in the image wearing his graduation gown and holding his certificate. Aryan isn’t very active on social media; therefore, his admirers aren’t getting updates on his life.

The University of Southern California recently staged a graduation ceremony with social distancing guidelines in mind. Aryan Khan’s photo from the event has gone viral on social media. Aryan is seen in his graduation robe at the ceremony in the photo. The name placed under Aryan’s photo is impossible to miss. Aryan Shah Rukh Khan is written on it.

Aryan graduated with a Bachelor of Fine Arts in Cinematic Arts, Film and Television Production from the School of Cinematic Arts as a part of the class of 2020. Messages of congratulations for the stunning star have flooded the post. 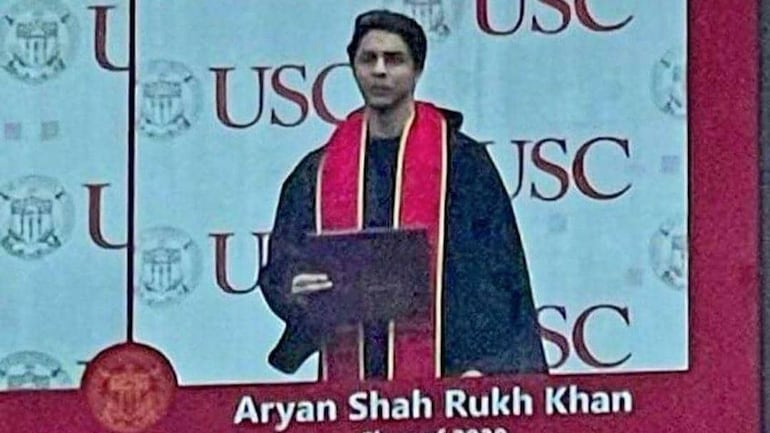 Aryan Khan was spotted with his mother Gauri Khan at the Mumbai airport in April. While the number of Covid cases in the country increased owing to the second wave of the epidemic, Internet users chastised the mother-son pair for going to New York. Many thought that they traveled to New York University to see Suhana Khan, who is a student there.

Shah Rukh Khan frequently discusses his bond with his children and what they want to accomplish with their lives. While many people are aware that SRK’s daughter Suhana aspires to be a Bollywood actor, few are aware that Aryan Khan is not interested in acting despite the fact that he had provided his voice to Simba in The Lion King. Shah Rukh had previously stated in an interview that Aryan “talks about his ambitions, and where he would like to be one day. But he’s very clear that way. He just wants to be bigger than me and that’s cool.”