Love is one of the purest feelings. It gives you butterflies in your stomach and lightness in your head. Only a few people are lucky enough to find the love they want and deserve in their lives, and when they do, there’s no reason they shouldn’t flaunt it. In this world where finding the one is so difficult, when one finds their soulmate and get an opportunity to be with them for the rest of their lives, they shouldn’t miss out on it. Dipika Kakar and Shoaib Ibrahim are living their ‘happily ever after’ together and make for a perfect, modern day couple.

Dipika and Shoaib met on the sets of ‘Sasural Simar Ka’, where they worked as colleagues and became really close friends. Soon, they fell madly in love with each other and started dating. The couple became famous amongst their fans when they appeared on the TV dance reality show, Nach Baliye 8. Soon the couple decided to make it official and got married on February 22, 2018 in Shoaib’s hometown. The wedding made to the headlines and Dipika finally added Ibrahim to her name.

Ever since then, the couple has been sharing their love for each other with their fans through their social media handles. But, in this modern day, internet world always finds a way to find faults in people and pick on them.

Recently, when Shoaib held an ‘Ask Me Anything’ session on Instagram stories to interact with his fans, one of his fans got too nosey. The fan asked Shoaib about why he does not help his wife Dipika with household chores. To this, Shoaib replied without any hesitation that he is glad she knows more than his life than he does. 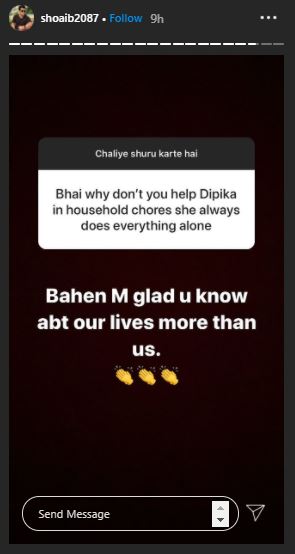 This is not the first time when Shoaib has been asked in-apt questions by his fans regarding his wife, Dipika Kakar. This has become more of a routine for Shoaib now to give savage replies.

Published by Vidhutma Singhania on 02 Sep 2020