Holi, one of the most famous and colorful festivals of India, got celebrated on March 29 with smiles and love. It is commemorated in every part of the country with the utmost joy and zeal. From common people to the film stars, each and every person has their approach of rejoicing the pious festival. Now, recently, a video recording of Bollywood actress Shraddha Kapoor has turned viral in which the actor is making attempts in order to save herself from children who were making plans to throw balloons full of water at her. At first, Shraddha, who was coming back from a set, was greeted by the kids. In the video, we can hear a short conversation between the ‘Baaghi’ actor and the kids. The children wished the 34-year-old ‘Happy Holi’ to which the actor replied the same.

But shortly, the kids got into their naughty mode and were seen making plans to throw water balloons on the popular actress. In the video, the scared actor is heard screaming ‘Nahi,’ even the paparazzi present at the moment persuaded the kids to not throw the balloons.

In the meantime, when we talk about the professional front, the actress’ 2019 movie ‘Chhichhore’ bagged the National Award for Best Hindi film during the last week. Soon, she will be witnessed sharing the screen along with Ranbir Kapoor in a movie to be helmed under the banner of Luv Ranjan. 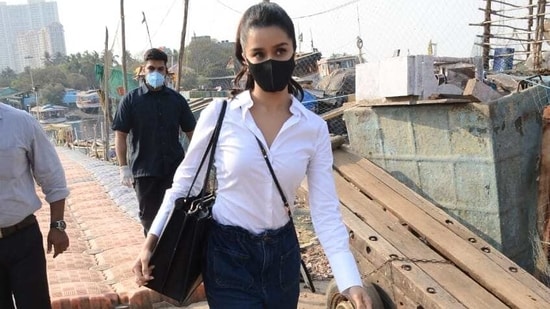 While sharing her exhilaration about the movie, Shraddha during one of her media talks stated, “I am doing Luv Ranjan’s film with Ranbir Kapoor. I have loved Luv’s films – Pyaar Ka Punchnama, Sonu Ke Titu Ki Sweety. I am super excited to be working with Ranbir. He is one of the best actors of our generation. I have loved his work. Nothing was offered to me earlier with Ranbir, I am looking forward to this film.”